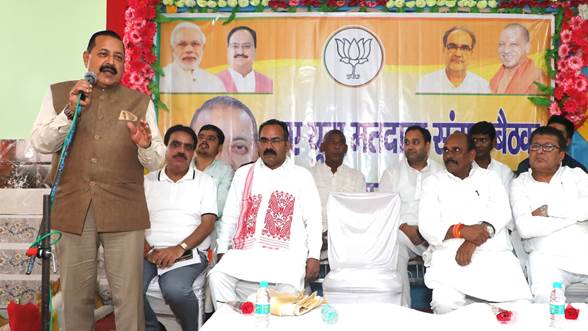 Uttar Pradesh (26/10/2022): Union Minister of State (Independent Charge) Science & Technology; Minister of State (Independent Charge) Earth Sciences; MoS PMO, Personnel, Public Grievances, Pensions, Atomic Energy and Space, Dr Jitendra Singh today said that the new voters will define India @2047, and with the active young years on their side, they have the privilege and opportunity to contribute to the making of Century India, as envisaged by Prime Minister Narendra Modi.

Addressing the new and young voters at Moradabad, Dr Jitendra Singh said, Uttar Pradesh is home to about 55 million young men and women who are in the 18-30 age group, which is approximately 37 % of the total voters in the State.

Dr Jitendra Singh told the youth that a few days ago, Prime Minister Modi launched Rozgar Mela – the recruitment drive for 10 lakh personnel and during the ceremony, appointment letters were handed over to 75,000 newly inducted appointees. He said, in near future, the target of 10 lakh government jobs will be completed in a mission mode.

The Minister, also appealed to the youth to strive for other means of livelihood through lucrative StartUp ventures and innovative entrepreneurship, as it is next to impossible for any country to provide government jobs to all.

Referring to Prime Minister’s focus on the most job-intensive sectors like agriculture, private sector and MSME, Dr Jitendra Singh said, today, under the Pradhan Mantri Kaushal Vikas Yojana, a huge campaign is going on to train the youth according to the needs of the industries of the country and added that 1.25 crore young people have been trained so far all over the country.

Dr Jitendra Singh pointed out that initiatives like liberalising drone policy, opening up space policy, and 20 Lakh crore rupees worth of loans under Mudra Yojana have opened new opportunities for the youth.

Referring to Prime Minister’s continued focus on youth power since 2014, Dr Jitendra Singh said, on August 15, 2017, in his Independence Day speech, Modi said, “January 1, 2018 will not be an ordinary day – those born in this century will start turning 18. For these people, this is a decisive year of their lives. They are going to be the creator of the destiny (Bhagya Vidhata) of our nation in the 21st century. I heartily welcome all these youth, honour them and offer my respects to them. You have an opportunity to shape the destiny of our country. A proud nation invites you to become a part of its developmental journey”.

Dr Jitendra Singh said, in the 2019 polls, 133 million young adults got the opportunity to vote and of them 70 million were young men and 63 million young women and over 72 percent of them were living in India’s villages. The Minister said, this number may touch 140 million by 2024, and this is India’s demographic dividend that should not be allowed to go waste.

Dr Jitendra Singh reminded the youth and also the administration that the Election Commission of India in July this year announced that those above the age of 17 years can now apply in advance to get enrolled in the voters’ list and not wait until the voting age of 18 years.

The Commission has directed the chief electoral officers and electoral registration officers of all states to work out tech-based solutions to enable the youth to file their advance applications concerning three subsequent qualifying dates – April 1, July 1 and October 1, and not only just January 1. The Minister said, the move will boost EC’s efforts to enrol new young voters who turn 18 in a year, for which an amendment was recently made to allow quarterly registration of voters.

Dr Jitendra Singh said, the Central government and the UP Government are jointly planning to hold ‘Yuva Vijay Sankalp Rally’ in all the nooks and corners of the state to make the youth aware of the developmental initiatives and achievements of the “Double Engine Sarkar”.

How metaverse is powering influencer marketing for promoting brand campaigns