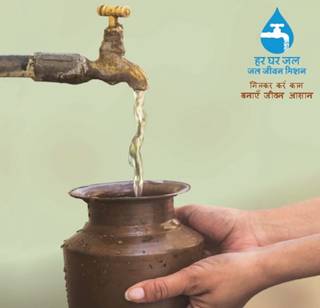 Abiding by the Jal Jeevan Mission, the community of Majhguwan Khurd in Bijawar Block of Chhatarpur district in Madhya Pradesh has drafted the Village Action Plan with the intent to remove decades of drudgery and pain which women were subjected to owing to abysmal water situation in the area. Central to the Jal Jeevan Missionis community participation with bottom-up planning approach, empowerment of local community& Gram Panchayats and enabling community contribution. This instillsa sense of ownership among the local community, create an environment of trust, and bring in transparency leading to better implementation & long-term sustainability of water supply sector in the country.

MajhguwanKhurd has a population of 1,652 people with farming as themain occupation.The village is 100% dependent on ground water for all its needs. The ground water source for drinking water depletes from December to February as large amount of water is utilized for Wheat cultivation. The groundwater level dips to the lowest point in June in the peak summer. Over exploitation of available ground water creates crisis during critical period.

The Village Action Plan has been formed based on the survey was carried out in the Gram Panchayat to map the existing water sources, availability of hand pumps and defunct tap connections. Only 20% of the households in the village had piped water connectionand 8 hand pumps are used to meet the water requirements in the village.The village action plan listed out the defunct tap connections and allotted funds for retrofitting of the piped water supply based on the survey conducted. The community decided to construct an ordinary tubewell, install a pump set, construct a boundary wall to protect the overhead tank and provisioned for an electric supply. The Public Health and Engineering Department officials provided technical details to the local community.The Gram Panchayat members were informed that under the Jal Jeevan Mission, provision will be made for providing 55lpcd water.

Grey Water Management was also planned by the villagers as it was understood that 60-70% of total water supplied to every household would get converted to grey water which can be managed through individual soak pits. For houses which did not have space to build soak pits, community soak pits were proposed under the Plan. Village Action Plan incorporated the need of cattle trough, common washing and bathing complex.

After the 3-month trial run undertaken by the department, the management of the water supply structure shall be handed over to the Gram Panchayat/ Village Water & Sanitation Committee who will be responsible for O&M and collecting user charges from the community as decided by Gram Sabha. The Gram Sabha in its meeting passed a resolution that people of MajhguwanKhurd will take the responsibility of planning, implementation,operation and maintenance of the infrastructure created under the mission. It was agreed that every member of the village shall respect the water body developed under the scheme and shall protect it. No one from the village should pollute the water body and must pledge to manage individual grey water generated once tap water reaches every household and save drinking water.