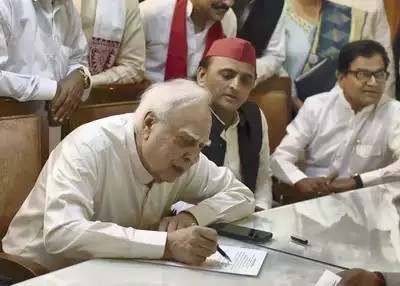 Uttar Pradesh (25/05/2022): Deepening the crisis in Congress further, Kapil Sibal, a prominent face of the G-23 group of the dissenting leaders, has resigned from the party and filed nomination papers for the Rajya Sabha elections as an independent on Wednesday in Lucknow backed by the Samajwadi Party (SP).

Sibal filed his nomination papers from Uttar Pradesh in the presence of the SP chief Akhilesh Yadav and other party leaders in Lucknow. Sibal is retiring from the Rajya Sabha on July 4.

“I had tendered my resignation from the Congress party on May 16,” he said after filing the nomination.

“I have filed nomination as an independent candidate. I have always wanted to be an independent voice in the country. While staying in Opposition, we want to create an alliance so that we can oppose the Modi government,” he added.

Sibal is likely to get elected to the Upper House as the SP has 111 MLAs in the Uttar Pradesh Assembly.

Notably, Sibal had been critical of Congress high command on various issues and has been demanding sweeping reforms in the party, including elections for the post of the Congress president.