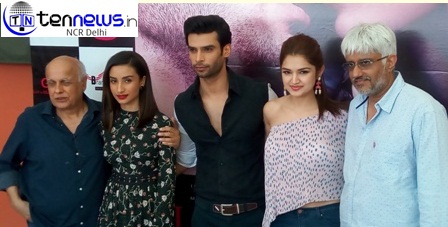 The sexilicious teasers and trailers of the upcoming film ‘Love Games’ has been all the rage online and recently the makers and the starcast landed to Delhi for the promotions in the city.

Written and directed by Vikram Bhatt, the film is presented by T-Series and Mahesh Bhatt. Produced by Mukesh Bhatt & T-Series, ‘Love Games’ stars Gaurav Arora, Tara Alisha Berry and Patralekha and is slated to release on 8th April, 2016.

Vikram Bhatt apart from wearing a director’s hat has also turned lyricist with the film and all the English tracks have been penned down by him. Asked about the same, he said “There are 13 songs in the film and when you’ll watch it, you will realise that they are used as a part of the narrative in the film and it will give you the feeling as if you are watching a Hollywood movie”

Patralekha who underwent a sea-change in her image from her first film ‘Citylights’ to ‘Love Games’ said “I was jobless after Citylights but I want to thank Vikram sir for such a transformation in my image and offering me a film. People will now see my other side of the personality”

With high dose of boldness, the film seems to have raised the bar in Bollywood when it comes to onscreen sex with its characters unapologetic about their sex lives and even experimenting with ideas that haven’t been explored much on the big screen.

Tara Alisha Berry has done few Telugu and Hindi films before getting big break from Vishesh Films and seems to be quite happy about her role “I was shy in the beginning but I consider Vikram sir as my idol. He literally hammered my thoughts and as a result I have become more bold which isn’t bad at all“