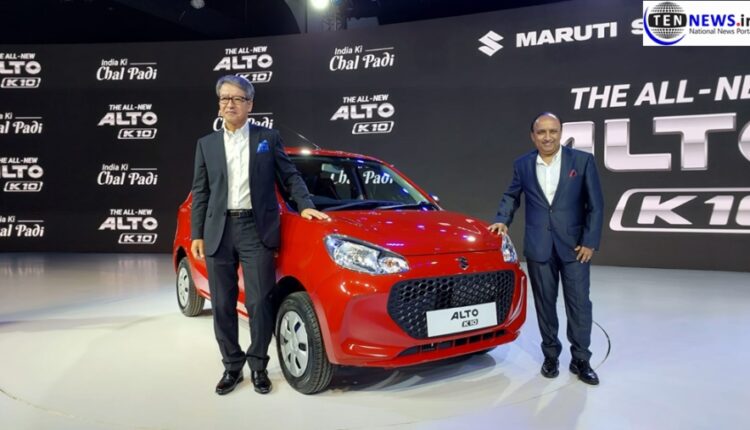 Maruti Suzuki launches the all-new Alto K-10: India’s highest-selling car model that has it all

Delhi, August 18th, 2022: Maruti Suzuki launched the latest version of its flagship automobile “Alto”. The all-new Alto K-10 with the new-gen hatchback design, excellent fuel efficiency, and loads of new features was launched this morning at the Aero City in New Delhi.

The Maruti Alto was first launched in the country back in 2000 and in the past 22 years, it has remained one of the best-selling models in India. 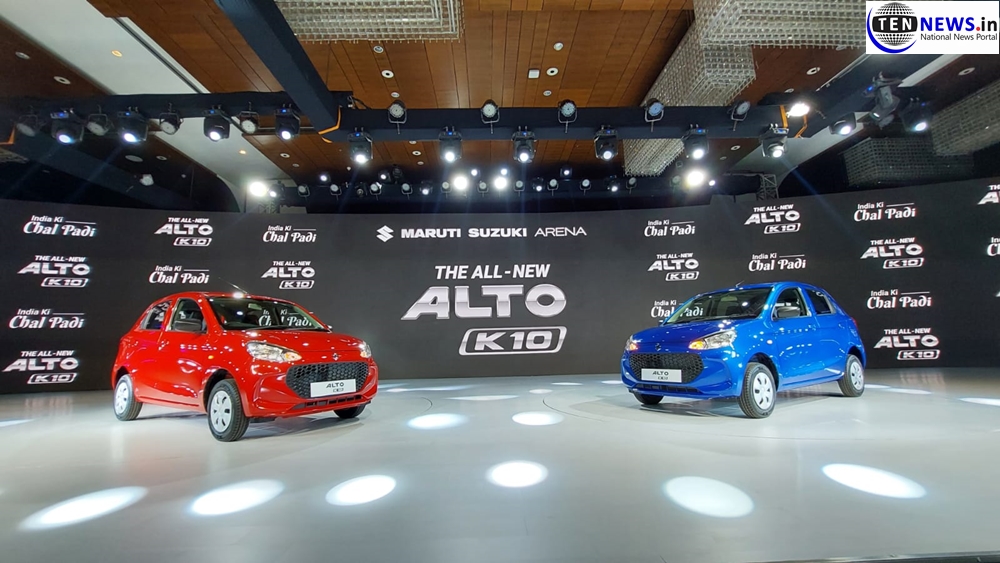 Maruti Alto has been the best-selling car for 16 consecutive years with over 43 lakh families across the country owning it. Every hour, 100 Altos are being sold across cities, for 22 years. If Alto were to be an independent car company, it would be India’s 4th largest car company.

The Managing Director and CEO of the country’s largest car maker, Maruti Suzuki India Ltd, Mr. Hisashi Takeuchi, began his address by highlighting the importance of the year 2022 to the company. “We now complete 40 glorious years of providing Joy of Mobility to India”, he said.

Takeuchi remarked that back in the day, cars were considered a luxury item and only owned by those who were rich. Maruti Suzuki entered the market with the aim of changing this ideology and thus manufactured affordable cars with the best features. Soon, the company was known for its “value-packed” cars.

“I feel great pride and joy to introduce the next-generation model of the Maruti Alto”, he noted.

He further adds that the all-new Alto K-10 is a result of their efforts to bring back the “value-packed” small car. The car has been conceptualized and designed according to the needs of people.

“Its authentic features and extraordinary hatchback design are sure to win the hearts of people”, he concluded. 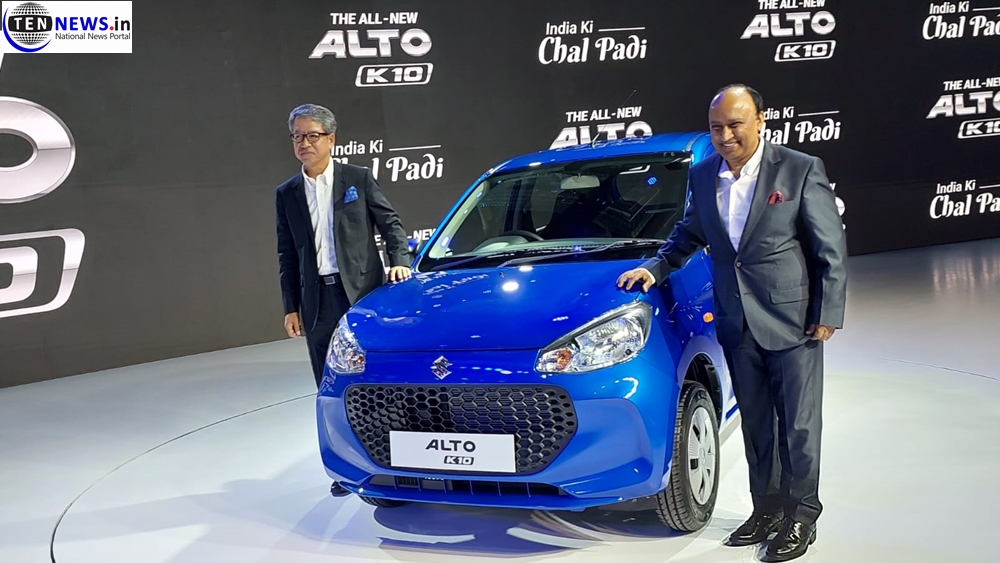 The Senior Executive Director of Marketing & Sales, Mr. Shashank Srivastava in his speech expresses his gratitude to the people of India for making it the best-selling car in the country.
“The legendary Alto is a true testament to our company that has immensely excelled in the last few years”, he said.

The Alto has played multiple roles in the lives of our customers and is known to be a buyer’s entry into the world of four-wheelers with every one in two people purchasing an Alto as their first car”, he continued. 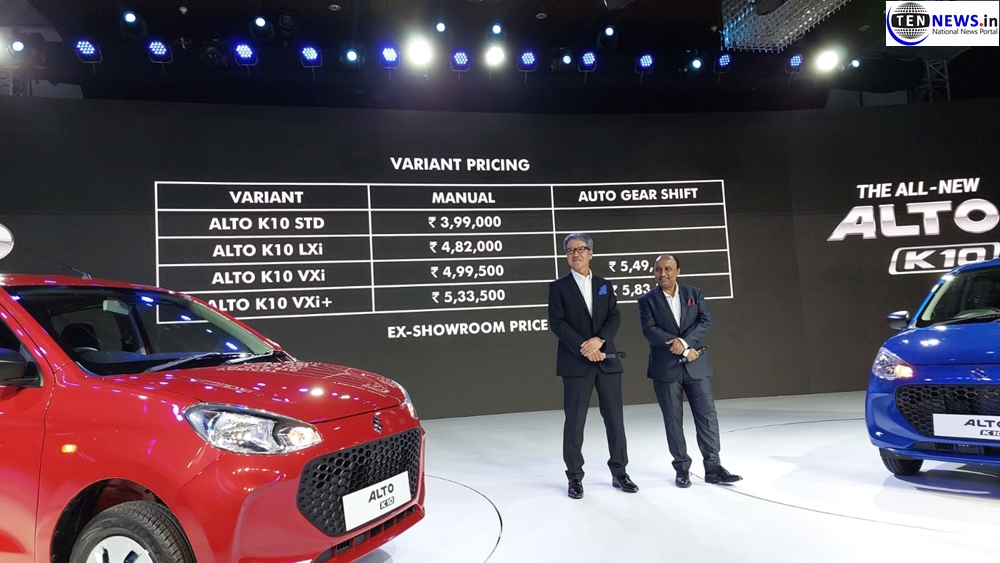 He further emphasizes the hatchback segment of the car which is the entry point in the world of mobility.

“The key to our success is understanding the needs of our consumers and with that kept in mind, the all-new version of Alto K-10 is ready to bring the joy of mobility to your lives,” Srivastava said.

The launch event also featured a new song called ‘Chal Padi’ which depicts the joys of Indian families purchasing their first car, and the latest features of the Alto K-10.

The Chief Techincal Officer, CV Raman lauds the dedication and hard work of the engineers that makes the Alto one of the best-selling cars in India.

“The authentic looks, the youthful style, and the hatchback design are all tastefully sculpted to the needs and demands of the Indian consumers”, he said.

Raman highlights the features of the car like fuel efficiency, the new K10C petrol engines, the smart navigation system, spacious cabin, and seats. 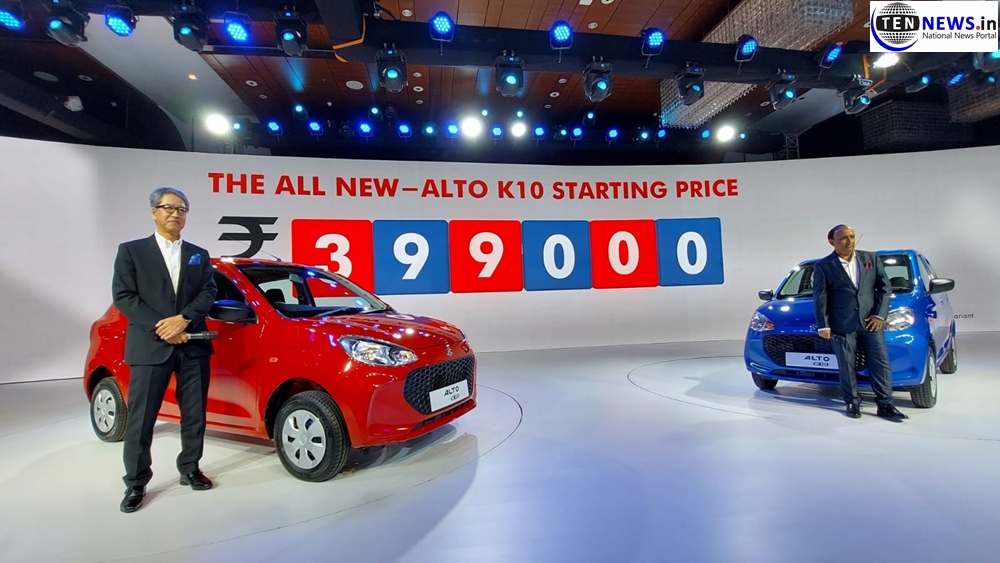 The new Alto K-10 will be available in six different variants. The top two variants will be offered with both manual and automatic gearbox choices.

Maruti Suzuki Alto holds the record for being the highest-selling Indian car model and has now added to its impressive numbers with the all-new Alto K-10 which is quoted as ‘the car that has it all’.

Nitish Kumar snubs BJP’s “jungle raj” allegations, says answers will be given at the appropriate time

“The new-gen version of Alto K-10 is all set to deliver the joy of mobility”, says Shashank Srivastava of Maruti Suzuki