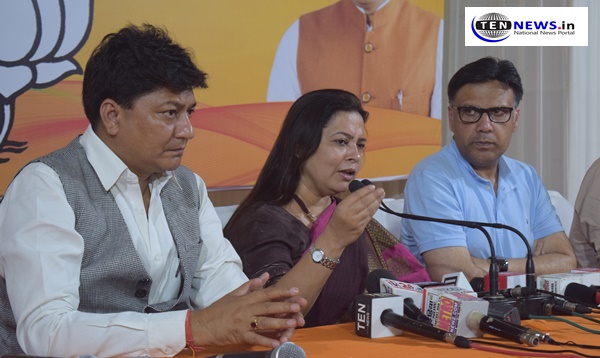 New Delhi : (24/04/2019) BJP MP Meenakshi Lekhi today presented her report card for past 5 years at a Press Conference in New Delhi. when questioned about the reason behind the delay of her report card, she said, “Mujhe publicity ke liye paisa nhi milta….”

She shared the expenses she did for the development of her area ‘New Delhi’.

She also added that, “We, the MPs receive an amount of ₹25 cr for development expenses and I would like to share that I spent ₹32 cr and you just be shocked to hear that. It was because previous Congress MP Ajay Maken left 7 cr before BJP came into power.

When asked about get opinion regarding Udit Raj who recently joined congress, she said, “He left the party due to his own personal grudges. He was upset because of the absence of his name in the candidates list this year.”

Also for your information, Gautam Gambhir has been moved to East Delhi replacing sitting MP Maheish Girri. “His father has a readymade garments business in east Delhi’s Gandhi Nagar. Also, party workers wanted him to contest from there. Being a youth icon and an international cricketer, he enjoys huge popularity,” BJP Delhi’s media in-charge Pratyush Kanth said.