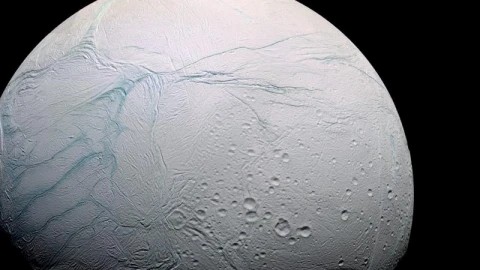 Scientists have noticed that the surface of the moon is covered with numerous cracks, which are believed to be heated spots where ice water and gases shoot up from the ocean floor and feed Saturn’s E-ring.

This discovery has sparked interest in the possibility of hydrothermal vents existing on the ocean floor of Enceladus, which could potentially lead to the discovery of life beyond Earth.

In response to these findings, scientists have proposed a mission to explore the moon without the need to land on its surface.

Enceladus is Saturn’s sixth largest moon and the 19th largest in the Solar System. Its surface is coated with pure ice, making it one of the most reflective objects in the solar system. At midday, the tiny moon reaches a temperature of -330 degrees Fahrenheit.

The moon is also known for its unique surface characteristics, ranging from ancient, heavily cratered areas to new, highly deformed topography. It travels at an average speed of 148,000 miles per day from Saturn in an elliptical orbit, and due to this, the moon always has the same side facing Saturn.

Things to Know Before Opting for BTL Marketing in India.