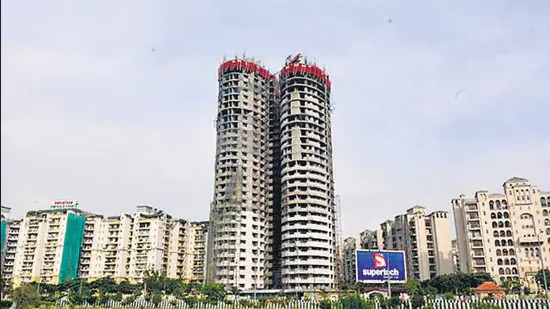 Noida, August 12, 2022: Noida Supertech Twin Towers are scheduled for demolition on August 28th as the Supreme Court defers its date from Aug 21st to 28th, following an appeal by the Noida Authority regarding the same.

Supertech’s 40-storey Twin Towers were constructed as a part of their Emerald Project in Noida sector 93A. It has now been deemed illegal as the structures are in violation of building norms.

The deadline was extended after the Noida Authority sought more time to prepare for the demolition. Over 3,500 kg of explosive will be filled in around 9,400 holes drilled in the columns and shears of the skeletal structures of the twin towers, according to officials.

A bench of Justices DY Chandrachud and AS Bopanna granted a period of one week from August 29th to Sept 4th to the agencies engaged in the demolishing exercise of the twin towers.

The Supreme Court has directed that the entire amount paid by the flat buyers be refunded with 12% interest from the time of booking.

The Residence Welfare Association of the Emerald Project is also instructed to be paid Rs. 2 crores for the harassment caused due to the construction of the two towers.