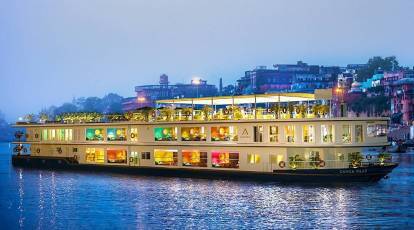 Varanasi (U.P.) 13th Jan 2023: The Prime Minister, Narendra Modi flagged off the World’s Longest River Cruise-MV Ganga Vilas and inaugurated the Tent City at Varanasi via video conferencing today. He also inaugurated and laid the foundation stones for several other inland waterways projects worth more than Rs. 1000 crores during the event. In line with the Prime Minister’s endeavour to boost river cruise tourism, the huge untapped potential of river cruises will get unlocked with the launch of this service and it will herald a new age of river cruise tourism for India.

Addressing the gathering, the Prime Minister hailed Lord Mahadev and greeted everyone on the auspicious occasion of Lohri. The Prime Minister emphasised charity, faith, tapasya and faith in our festivals and the role of rivers in them. This makes the projects related to river waterways all the more significant, he said. He pointed out that the longest river cruise from Kashi to Dibrugarh is being flagged off today which will bring to the fore, places of tourism in North India on the world tourism map. He said other projects being dedicated today in Varanasi, West Bengal, Uttar Pradesh and Bihar, Assam worth 1000 crore will give a push to the tourism and employment potential in eastern India.

Underlining the central role of river Ganga in the life of every Indian, the Prime Minister lamented that the area around the banks lagged behind in development in the post-independence period thereby leading to a massive exodus of population from this area. The Prime Minister elaborated on a twin approach to address this unfortunate situation. On the one hand, the campaign to clean Ganga was undertaken through Namami Gange and ‘Arth Ganga’ was taken up on the other. In ‘Arth Ganga’ steps have been taken to create an environment of economic dynamism in the states from where Ganga passes.

Directly addressing the tourists from foreign countries who are traveling on the maiden journey of the cruise, the Prime Minister said, “Today India has everything and a lot beyond your imagination.” He further added that India can only be experienced from the heart as the nation has welcomed everyone with open hearts irrespective of region or religion, creed or country and welcomed tourists from all parts of the world.

Throwing light on the experience of the river cruise, the Prime Minister informed that it has something special for everyone. He added that those seeking spirituality will cover destinations like Kashi, Bodh Gaya, Vikramshila, Patna Sahib and Majuli, tourists looking out for a multinational cruise experience will get the opportunity to via Dhaka in Bangladesh, and those wanting to witness the natural diversity of India will cross through Sundarbans and the forests of Assam. Observing that the cruise will pass through 25 different river streams, the Prime Minister said that this cruise has significant importance for those who have a keen interest in understanding the river systems of India. He also mentioned that it is a golden opportunity for those who want to explore the myriad culinary and cuisines of India. “One can witness the extraordinary amalgamation of the heritage of India and its modernity on this cruise”, the Prime Minister remarked as he shed light on the new era of cruise tourism where new employment opportunities will be created for the youth of the country. “Not just foreign tourists but Indians who traveled to different nations for such an experience can head towards North India now”, the Prime Minister said. He also informed that similar experiences are being readied in other inland waterways of the country to give a boost to cruise tourism while keeping in mind the budget as well as the luxury experience.

The Prime Minister also mentioned that India is entering into a robust phase of tourism as with a growing global profile, curiosity about India is also increasing. That is why, said the Prime Minister, in the last 8 years various steps were taken to expand the tourism sector in the country. Places of faith were developed on priority and Kashi is a live example of such efforts. With improved facilities and the rejuvenation of Kashi Vishvanath Dham, Kashi has seen a huge increase in the number of visiting devotees. This has given a massive boost to the local economy. The New Tent City, infused with modernity, spirituality and faith, will provide a novel experience to the tourists.

The Prime Minister said that today’s event is a reflection of the policies, decisions and direction taken after 2014 in the country. “This decade of the 21st century is a decade of infrastructure transformation in India. India is witnessing a level of infrastructure which was unimaginable a few years ago.” He said from Social infrastructure like houses, toilets, hospitals, electricity, water, cooking gas, educational institutes to digital infrastructure to physical connectivity infrastructure like railways, waterways, airways and roads, all these are strong indicators of the rapid growth of India. In all the fields India is seeing the best and biggest, he pointed out.

Coming back to the theme of development of eastern India, the Prime Minister said that today’s events will help in making eastern India a growth engine for Developed India. This connects Haldia multimodal terminal with Varanasi and is also connected with India Bangladesh protocol route and Northeast. This also connects Kolkata port and Bangladesh. This will facilitate business from Uttar Pradesh, Bihar, Jharkhand, and West Bengal to Bangladesh.

Emphasising the need for training of the staff and skilled workforce, the Prime Minister informed that a Skill Development Center has been set up in Guwahati and a new facility is also being constructed in Guwahati for the repairing of ships. “Be it a cruise ship or a cargo ship, they not only give a boost to transport and tourism, but the entire industry associated with their service also creates new opportunities”, the Prime Minister said.

Referring to a study conducted, the Prime Minister informed that waterways are not just beneficial to the environment but also help in saving money. He said that the cost of operating waterways is two and a half times lesser than that of roadways, and one-third lesser when compared to railways. The Prime Minister also touched upon the National Logistics Policy and said that India has the potential to develop a waterway network of thousands of kilometres. He also emphasised that India has more than 125 rivers and river streams which can be developed to transport goods and ferry people while also giving impetus to further expanding port-led development. He emphasised the need to build a modern multi-modal network of waterways and informed about the partnerships with Bangladesh and other countries which have strengthened the water connectivity in the Northeast.

Concluding the address, the Prime Minister remarked on the continuous development process of developing waterways in India and said, “Strong connectivity is essential for building a developed India.” The Prime Minister expressed the belief that the river of India will give new heights to water power and trade and tourism of the country and wished a pleasant journey to all the cruise passengers.

MV Ganga Vilas will begin its journey from Varanasi in Uttar Pradesh and travel around 3,200 km in 51 days to reach Dibrugarh in Assam via Bangladesh, sailing across 27 river systems in India and Bangladesh. MV Ganga Vilas has three decks, 18 suites on board with a capacity of 36 tourists, with all the luxury amenities. The maiden voyage has 32 tourists from Switzerland signing up for the entire length of the journey.

The MV Ganga Vilas cruise is curated to bring out the best of the country to be showcased to the world. The 51 days cruise is planned with visits to 50 tourist spots including World Heritage Sites, National Parks, River Ghats, and major cities like Patna in Bihar, Sahibganj in Jharkhand, Kolkata in West Bengal, Dhaka in Bangladesh and Guwahati in Assam. The journey will give the tourists an opportunity to embark upon an experiential voyage and indulge in the art, culture, history, and spirituality of India and Bangladesh.

Tent City has been conceptualised on the banks of the River Ganga to tap the potential of tourism in the region. The project has been developed opposite to city ghats which will provide accommodation facilities and cater to the increased tourist influx in Varanasi, especially since the inauguration of Kashi Vishwanath Dham. It has been developed by Varanasi Development Authority in PPP mode. The tourists will reach the Tent City by boats from different Ghats situated in the vicinity. The tent city will be operational from October to June every year and will be dismantled for three months due to the rise in river water level in the rainy season.

The Prime Minister also inaugurated four floating community jetties at Saidpur, Chochakpur, Zamania in Ghazipur district and at Kanspur in Ballia district in Uttar Pradesh. Besides, the Prime Minister laid foundation stones for the five Community Jetties at Digha, Nakta Diyara, Barh, Panapur in Patna district and Hasanpur in Samastipur district in Bihar. More than 60 community jetties are being constructed along the river Ganga across the states of Uttar Pradesh, Bihar, Jharkhand and West Bengal to boost the economic activities and improve the livelihoods of local communities in the region. The community jetties would play a key role in improving the livelihoods of people by providing simple logistics solutions for small farmers, fishery units, unorganised farm-producing units, horticulturists, florists and artisans focussing on economic activities in and around the hinterland of river Ganga.

The Prime Minister also inaugurated the Maritime Skill Development Centre for North East at Guwahati. It will help hone the rich talent pool in the North Eastern region and will provide for better employment opportunities in the burgeoning logistics industry.

Non tech jobs could be at the forefront for job recovery in 2023: Indeed