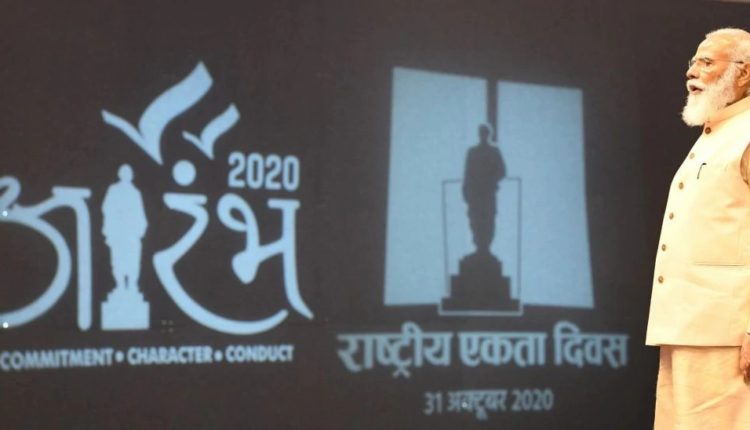 PM Modi interacts with Officer Trainees of Indian Civil Services in the second edition of the Integrated Foundation Course, ”Aarambh”

The Prime Minister today interacted with the Officer Trainees (OTs) of the Indian Civil Services at LBSNAA Mussoorie through a Video conference from Kevadia, Gujarat. This is a part of the integrated foundation course AARAMBH launched for the first time in 2019.

After witnessing presentations made by the OTs, in his address, the Prime Minister urged the probationers to follow Sardar Vallabhbhai Patel’s philosophy of “serving the citizens of the country is the highest duty of a civil servant”.

Shri Modi exhorted the young officers to take the decisions in the context of the nation’s interests and to strengthen the unity and integrity of the country. He stressed that the decisions taken by the civil servants should always be in the interest of the common man notwithstanding the scope of the department or the region in which they are working.

The Prime Minister stressed that the focus of the “steel frame” of the country should not be merely in managing the daily affairs but in working for the progress of the nation. He said it becomes all the more important in crisis situations.

Shri Narendra Modi referred to the importance of the training and its major role in developing the skill-set for achieving new goals, for adopting new approaches and new ways in the country.

The Prime Minister remarked that unlike in the past, now modern approaches in training of Human Resource is being emphasized in the country. He pointed out the transformation in the training pattern of civil servants in the last 2-3 years. He remarked that Integrated Foundation Course ‘Aarambh’ is not just a beginning, but also a symbol of a new tradition.

Shri Modi referred to one of the recent reforms in Civil Services the Mission Karmayogi and said it is an attempt at capacity building of Civil Servants to make them more creative and confident.

The Prime Minister said that the Government would not run with a Top-Down approach. He said the inclusion of the public for whom the policies are drafted is very important. He added the people are the real driving force behind the Government.

He said the role of all bureaucrats in the present mode of working in the country is to ensure Minimum Government and Maximum Governance. He urged the civil servants to ensure that the interference in the lives of citizens is reduced and the common man is empowered.

The Prime Minister asked the Civil Servant Trainees to practise the mantra of Vocal for Local in the country’s efforts to become AatmaNirbhar.