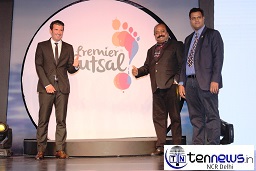 Mumbai, 5th April: Luis Figo, Real Madrid FC and Portuguese soccer legend, today, announced Premier Futsal, a first-ever multi-national Futsal league conceptualized by Indian entrepreneurs under the entity Premier Futsal Management Pvt. Ltd.
Futsal, a 5-a-side shorter variant of Soccer with two halves of 20 minutes each, is governed by Futsal Association of India (FAI) with accreditation from the international governing body, Asociación Mundial de Futsal (AMF).
The franchise-based league will be played across eight cities in India from July 15th to July 24th 2016 and is set revolutionize how the sport is played and consumed globally.
Premier Futsal, will bring together 56 of the best current Futsal players from across the world in a competitive format. The pioneering model will see each playing team mandatorily comprise of three international Futsal players, one international marquee soccer player and one Indian Futsal player. Each squad size will be of twelve players.
Premier Futsal, in association with FAI, will launch a talent hunt program across eight cities to scout and select Indian players. The program will comb through 2500 participants per city, to shortlist five regional players for each team.
Chairman, Premier Futsal, Mr. Xavier Britto, commenting on the launch said “Premier Futsal is a truly world-class league, which will feature best current Futsal players from across the globe. Owing to the unique and innovative model, the league will not only disrupt the global Futsal scenario, but also establish the first generation of professional futsallers in India. Given the fast-paced all action nature of the sport and its short duration, we are confident Premier Futsal will capture the imaginations of TV audience as well as fans in-stadia”

Speaking at the launch, President of Premier Futsal and Former World Player of the year, Luis Figo said, “Premier Futsal is set to take the sport of Futsal to the next level internationally. Back in Portugal, I have played Futsal extensively growing up which instilled quick thinking, skills and close control. In the last two decades, the sport has established its identity and with Premier Futsal, we hope to further propagate the sport in its individual capacity.”
AMF Vice-president and Co-founder & President, FAI, Mr. Namdev S Shirgaonker, said “Futsal has been around for over 70 years and currently it is one of the fastest growing sport in the world and as well as in India. We, at AMF and FAI, are extremely pleased to partner with Premier Futsal. The Futsal scenario, especially in India, will greatly benefit from a structured professional league, wherein young Indian player would rub shoulders with global talent. The league would also thrust the sport in mainstream attention and make aspirational for the youth of the country. The AMF globally and FAI in India share the same development vision for the sport as Premier Futsal team, which is the basis of an enduring partnership.”
Premier Futsal was officially launched and colors were unveiling through a press conference in Mumbai today in the presence of Premier Futsal Management Pvt Ltd team – Luis Figo, Mr. Xavier Britto, Mr. Dinesh Raj, Mr. Abhinandan Balasubramanian, Ms. Nithyashree Subban and Mr. Balu Nayar.

About Futsal Association of India (FAI)
Futsal Association of India (FAI) is an organisation which has Introduced Futsal in India and been developing the game of futsal since 2008. Namdev Shirgaonkar, founder President of FAI, introduced this game in India in 2008. Since then this game has emerged as new and fast form of soccer in India. FAI is affiliated With Association Mundial de Fútbol de Salón (AMF) ,the oldest world body of Futsal, since 2011 & is also a founder member of the Confederation of Asian Futsal (CAFS).

Updates on Covid-19 : Active caseload below 7 lakh for the first time after 2 months