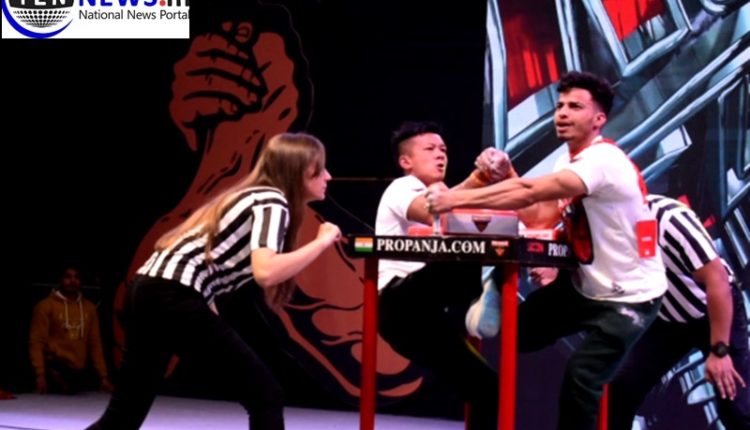 This refreshing and innovative fun sport that we have all tried at some point of our lives, is all set to make headlines for many. Pro Panja League is being organized by Swen Entertainment, headed by Parvin Dabas and Preeti Jhangiani.

With the aim at health, wellness and fitness this is another small step towards the big goal of Fit India, Hit India. ‘Aapki Kismat Aapke Haath’ is the tagline of the league, a game of the wrist clearly won with arm strength. Sports Minister Kiren Rijiju along with Olympic champion Vijendra Singh graced the first Pro Panja league event where Rijiju promised support for the game.

There were 6 weight categories for men and 2 for women to ensure the matches are organized accordingly and fair play is maintained. For men the categories were 60kgs, 70kgs, 80kgs, 90kgs, 100kgs and 100kg plus. For women there were 2 categories 65kgs and 65kgs plus and one specially abled category was also there. This is the first time, that specially abled athletes are competing in the same tournament/league as their fellow athletes.

“We have big plans for the league and plan to do the Nationals for 2 years and then of course move on to the Asian and then to the World Arm Wrestling stage. In the future, we will also be changing it to the league format,” says Preeti.

Along with the Pro Panja League, our company Swen Entertainment is also going to make another big announcement on the film stage, and personally too both Preeti and Parvin will be announcing their next acting projects on the web this year.

The registration and the weigh ins took place a day before the actual tournament, to make sure the participants are segregated into appropriate category before the tournament starts.

The tournament was hosted by king of comedy Khayali and Preeti Jhangiani herself. Senior referee from the World Arm Wrestling Federation, Anna Belenciuc from Moldova was the referee and also acted as an observer for the entire tournament and the tournament itself is sanctioned and overlooked by the Indian Arm Wrestling Federation. There were 3 tables for arm wrestling and 3 judges on each table for the prelims and an official table for appeals will be set up.

The Pro Panja National League will take place this summer across 12 Indian cities, the winners of the Pro Panja League secured a direct entry into the National League. For the first two years the Pro Panja League will be developed and take place as a National Tournament with Indian players and from the third year onwards it will also branch out into a franchisee team format league. So, let the adrenaline rush begin and let your Kismat shine with the strength of your arm.