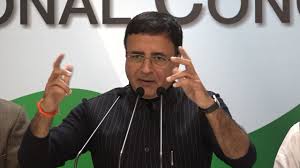 New Delhi : (06/03/2019) The Congress party’s chief spokesperson Randeep Singh Surjewala told reporters today that the Indian Negotiating Team (INT) to finalise the purchase of the fighter aircraft was sidelined and National security advisor Ajit Doval finalised the negotiation at the behest of the Prime Minister’s Office.

This is a fresh attack of Congress on Prime Minister Narendra Modi over the Rafale aircraft deal, alleging that he misused his office to “benefit” Dassault Aviation and that a case under the prevention of corruption law is made out against him.

The government has rejected the Congress’s charge of corruption in the deal with the ruling BJP accusing the party of spreading lies to target it.

Surjewala claimed the government bought the fighter aircraft at a much higher rate than what was negotiated by the UPA and also waived bank guarantee.

The government’s claim of buying the 36 aircraft at Rs 59,000 crore is wrong and the INT has put the figure at Rs 64,000 crore, he claimed, accusing the government of misleading Parliament.