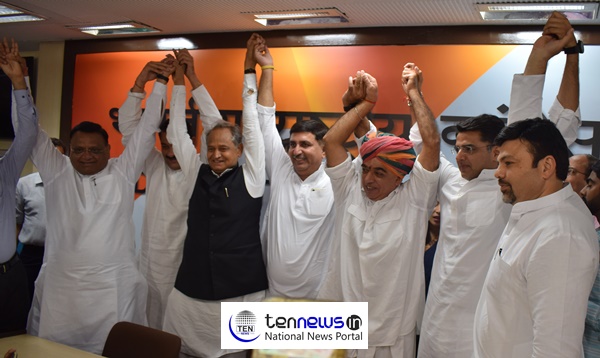 Rafale row: ‘Are you PM of India or PM of Anil Ambani’, Congress asks Modi

“PM Modi deal with Dassault Aviation strongly underlines the change of Ex French President, Mr. Francois Hollande about PM Modi securing a deal for Shri Anil Ambani. The BJP which is running helter skelter and throwing all kinds of inconsumable alibis to defend the indefensible will have to be made accountable on the Biggest Defence Scam that has hit the country.”

“Situation in BJP is such that we have a long line of leaders who want to join Congress.Rahul Gandhiji will take a call on how we accommodate them in the future,” said, Ashok Gehlot, senior Congress leader and general secretary incharge of organisation.

“Today we met Rahul Gandhi and he welcomed us in the Congress family.We are hopeful that our supporters will benefit Congress in both assembly and general elections,” said Manvendra Singh, who joined Congress today morning after quitting BJP.

“As a foot soldier of Congress henceforth I would like to take ahead the issue of corruption happening in the current government to the masses,” said Ashish Deshmukh who joined Congress today from BJP.

Congress asks ModiRafale row: 'Are you PM of India or PM of Anil Ambani'
0 249
Share FacebookTwitterGoogle+ReddItWhatsAppPinterestEmail