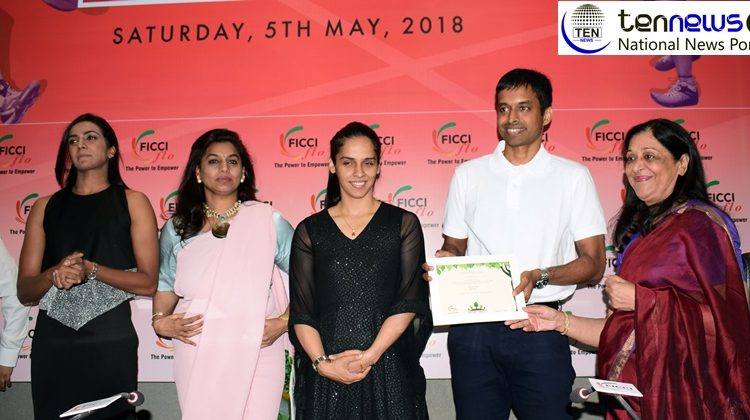 New Delhi: ‘In 2006, we were in a tour to China. When we went for the lunch, there was only non-vegetarian food and Saina Nehwal was pure vegetarian then, after asking with the management, I asked her to eat non-veg food. And without uttering a word she silently obeyed and consumed non-veg food in her life and rushed to the practice,” revealed Indian Badminton Coach Pullela Gopichand on Saturday during a felicitation programme when asked about the dedication and scarifies for this achievement.

To felicitate ace Indian shuttlers PV Sindhu and Saina Nehwal for their recent success in Commonwealth Games, FlCCl Ladies Organisation (FLO) organised a felicitation cum interaction programme in Delhi today where Indian Badminton Coach, Pullela Gopichand, PV Sindhu and Saina Nehwal and their parents were present. And awarded them with ‘the Golden Girl of Indian Badminton Award’.
Replying to the questions of amount of dedication, pain and scarifies needed to become such a player, Phllela replied, “They have never disobeyed me. On my asking, they gave up their phones, laptop, stop watching TVs and 8 to 10 hours of dedicated practice. Besides, a strong will and dedication needed to become a player.”

In the recently concluded, Commonwealth Games, ace shuttlers swept off the badminton women’s singles held at Gold Coast this year, where Saina Nehwal bagged gold and P V Sindhu silver, creating a defining moment in the history of women’s badminton in lndia.
On the sidelines of the felicitation ceremony, a panel discussion was organised with Saina Nehwal, PV Sindhu and P Gopichand, wherein they shared their journey in the badminton world and discussed about possible ways to create a roadmap for sports to evolve as crucial tool for women empowerment.

Moreover, Boria Majumdar, sports journalist, academician, historian, commentator and author was the moderator of the panel discussion. He also talked about how the Sports arena has changed for women athletes over the years.

Speaking on the event, FLO President, Pinky Reddy said, “FLO believes that to achieve the holistic goal of women empowerment, more and more women needs to engage in sports and equal opportunities should be created for them in this arena.”