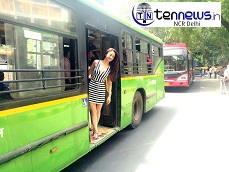 Director Saurabh Varma, with his actors Shiv Pandit and Sandeepa Dhar were in the National capital to promote their upcoming film ‘7 hours to Go’. While Natasa Stankovic couldn’t make it to Delhi, Saurabh is making sure that their film is the talk of the town in the next two days.

In Delhi, they have been spreading the cheer at Delhi’s Cannaught Place. From travelling in a local bus to taking an auto ride, Sandeepa Dhar and the director Saurabh Varma are leaving no stone unturned to promote their upcoming investigative thriller.

Cannaught Place is famous for so many things; out of these is the exquisite variety of ‘Paan’ that are sold here. The Heropanti actress who is fond of ‘Paan’ specially went to the ‘Paan’ Shop and tried every flavour. The girl infact helped the shopkeeper in selling those and learnt the art of making a Paan too.

Releasing on 24 June, the new-age investigative thriller will keep you guessing from start to end with a multitude of twists and turns. The gritty film revolves around a hostage situation and has loads of high octane action performed in real locations in Mumbai and Pune.