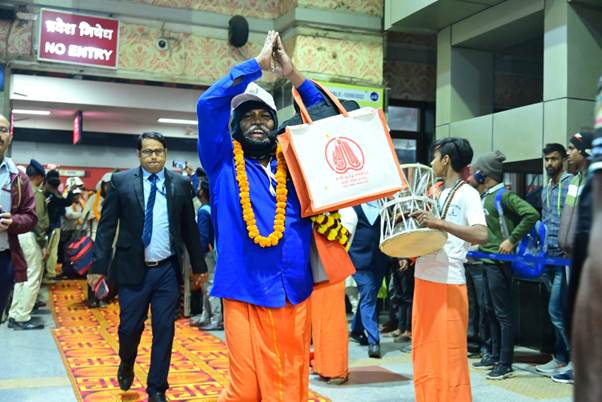 Kashi (22/11/2022): The second batch of Tamil delegation comprising students, cultural artists, academicians, litterateurs, historians, etc. from various parts of Tamil Nadu has reached the holy city of Kashi on Tuesday morning to attend the month long ‘Kashi Tamil Sangamam’.  They were received with a grand welcome on their arrival at the Varanasi Cantt. Railway station. After attending the festival at Kashi, they will also visit Prayagraj and Ayodhya.

More delegates in similar groups from various parts of Tamil Nadu will be reaching Kashi in different batches to participate in the month long ‘Kashi Tamil Sangamam’. Apart from Varanasi, they will also visit Prayagraj and Ayodhya. The overarching objective of this people-to-people exchange programme is to bring these two traditions of knowledge and culture closer together, while building an understanding of shared heritage and strengthen ties between the people of these two regions . The delegation from Tamil Nadu will be able to understand the historical importance of ancient city of Kashi. During the course of the month long event, various cultural groups from Tamil Nadu will organize cultural programs in Kashi.

It is noteworthy that ‘Kashi Tamil Sangamam’ was inaugurated by Prime Minister Narendra Modi on 19th November. Apart from the delegation from Tamil Nadu, local residents of Kashi in large numbers are also participating with great enthusiasm in this month long event.

Search and seizure action by Income Tax Department in Bihar