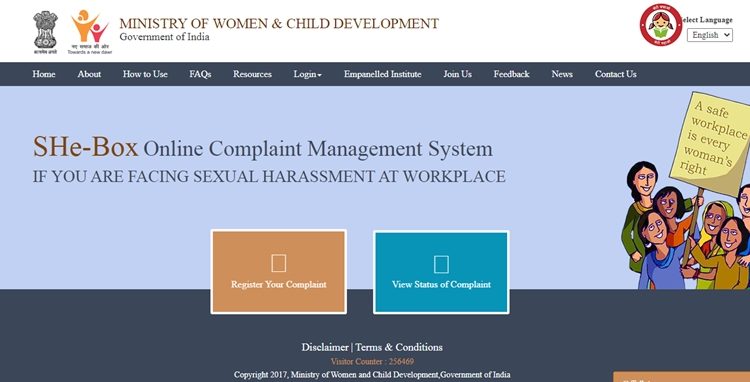 The Ministry of Women and Child Development (MWCD) has developed an online complaint portal titled Sexual Harassment Electronic Box (SHe-Box) to facilitate the registration of complaints related to sexual harassment of women at work place. Once a complaint is registered in the SHe-Box, it directly reaches the concerned authority having jurisdiction to take action in the matter. The responsibility to take action on such complaints as well as to ensure updating of status in that regard on SHe Box, is with the concerned Central Ministries/ Departments.

As of now, total 391 complaints have been received in the SHe-Box pertaining to various Central Ministries, out of which 150 complaints have been received since 01.01.2020. Action on the complaints lodged in SHe Box is the responsibility of the concerned Ministry/ Department as per laid down procedure. Analysis of the 36 cases lodged at SHeBox and shown against MWCD shows that amongst them, there are only 2 cases of sexual harassment of women at workplace, with 3 entries on the portal pertaining to complaint from same person against same individual. The other 32 cases are in the nature of public grievances on various matters relating to violence against women, dowry harassment, misbehaviour, suggestions etc. Further, neither of the 2 cases of sexual harassment of women at workplace appearing in the portal against MWCD pertain to a workplace of the Ministry.

Safety and security of women in the country including providing a safe and secure environment at workplace is of utmost priority for the Government. Keeping this in view, the Government has enacted “The Sexual Harassment of Women at Workplace (Prevention, Prohibition and Redressal) Act, 2013” (SH Act) which aims to provide protection to women against sexual harassment at workplace and for the prevention and redressal of complaints related to it for all women, irrespective of their age, employment status or nature of work whether working in public or private, organised or unorganised sector.

The Act casts an obligation upon employers of all workplaces, public or private, to provide a safe and secure working environment free from sexual harassment, whereby every employer is mandated to constitute an Internal Committee (IC) where the number of employees/ workers is ten or more and also for constitution of Local Committees at District level.

MWCD has issued advisories to States/ UTs and the Central Ministries/ Departments from time to time for strict implementation of the Act so as to create women friendly work environment..

This information was given by the Union Minister for Women and Child Development, Smriti Zubin Irani, in a written reply in the Rajya Sabha today.

Rahul Gandhi Busy With Yatra, has no vision for Gujarat, says Hardik Patel