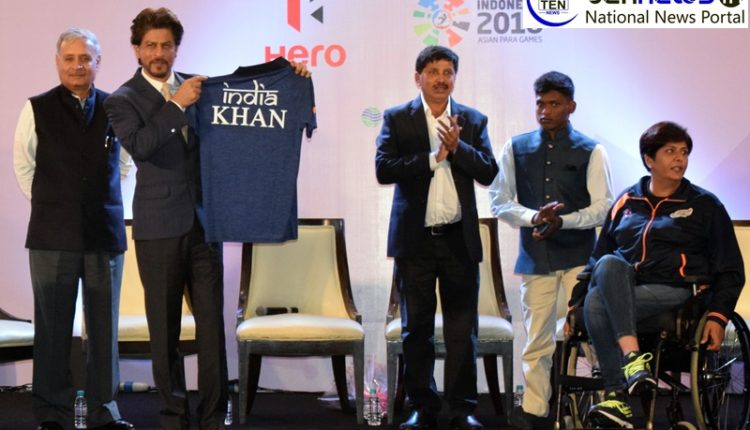 New Delhi: Shah Rukh Khan today greeted para athletes at Ashoka Hotel during his visit in New Delhi. The actor attended the send-off ceremony of the Indian Paralympic Contingent for Asian Para Games 2018 which is to be held in Jakarta.

Meer Foundation owned by Shah Rukh is also known to have helped acid attack survivors and exists to provide a better life to those who have been neglected by society and to foster humility, pride and gallantry among the men in their lives.

“First i would like to say that i’m from Delhi. From childhood days i always wanted to be a sportsman. I use to play hockey, football, cricket and use to take part in athletics as well. I was not that good but i kept on trying and i always wanted to represent our country in any sports. I got hurt on my back in my childhood, very few people know this. Those times there were no good facilities like it is today. So we couldn’t find any person for the treatment and our family was quite poor. There was no money as well so we could afford the treatment. I haven’t tell this to anyone, selfishly i have come here to get motivation from you guys.”

He further said, “The Second thing which i personally believe. That we all are somewhat incomplete. Be it physically, Mentally and emotionally. The only way in life is to take those disabilities forward by facing them and to compete with them. I have been told by Mr. Rao that you have to encourage them but in reality i have not come here to encourage you guys but to get encouragement and confidence.”

Ayushman Bharat scheme would be a real boon for the poor and needy: Venkaiah Naidu