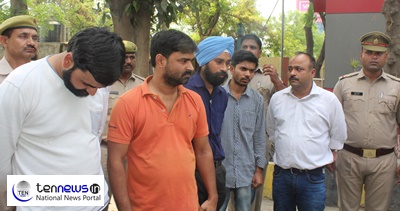 Noida’s thriving fake Industry sector today took another leap when an elite racket was busted for duping on the pretext of offering international MBBS Degree!

Noida is not only UP’s show window and a well know industrial town but also has the infamous reputation of being a thriving hub of fake companies. From fake travel agencies or insurance agencies to dubious MLM models and large number of fake call centers Noida Police has busted many of these in the past.

However today’s revelations even shocked the well experienced police officials of the district. Sector 20 police today raided and arrested a group of well-educated individuals who were running a full-fledged agency to dupe aspiring MBBS students. The raid was conducted on the complaint of Ram Prakash Sharma who was one of the clients of the gang and had paid them money for the MBBS course.

The mastermind of the gang was Anuj Diwedi, a resident of B block Dilshad Garden who played the role of Director at his fake company established in Noida’s sector 58. Anuj was running the company named Saint Martin Administrative Service which would dupe unsuspecting individuals by offering them a fictional opportunity to pursue MBBS course from reputed universities of Netherland and other countries.

The fake office had a well established set-up with full-fledged staff playing their dummy roles with complete dedication. Ghaziabad resident Raghav Singh was a co-owner and chief financial officer of the company, Delhi’s Lajpat Nagar resident Sushil Kumar worked as data entry operator, Marut Sharma resident of Faridabad was working as counselor and admission manager whereas Harjit Singh from Delhi was IT head.

All of these arrested individuals were involved in convincing the students to apply for the international course and then would dupe them of their hard earned money. Police however haven’t recovered any duplicate or forged degrees from their office.

They would also put up stalls at different Education Expo’s to lure interested students in to their traps.