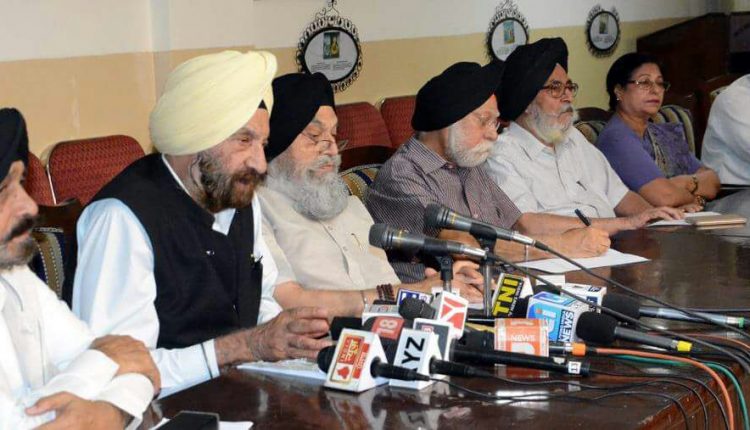 On this occasion DSGMC Chief Advisor Kulmohan Singh, the Chairman of Gurmat College Harinderpal Singh, Historian Dr. Harbans Kaur Sagoo and the  Guru Granth Sahib Education Center Chief Col. Joginder Singh Shahi also addressed the media. Dr. Jaspal Singh said that the history of any community tells about their identity. The removal of Sikh History is like remittal to the legacy & martyrdoms of Punjab. On one side, Sikh Community while going their campaign for the history of Guru Teg Bahadar Sahib, Saragarhi and the bravery saga of Chaar Sahibzadas becoming the part of NCERT books, but on other side Sikh History has removed from the schools of Punjab which is known by the homeland of Sikhs. Now how can we pressurize NCERT to add Sikh History in their syllabus? This is important to make our children aware about Sikh History & heritage.

Trilochan Singh said that NCERT should make Advisory Committee as marked the Sikh time period from Guru Nanak Dev Ji to Sikh Martyr. So that Sikh History becomes the specific chapter in NCERT syllabus. Maharaja Ranjit Singh makes Gilgit & other part of Ladakh region after dispossessing them from China, for which Sikhs gave martyrdom. Shall we don’t tell this history to our children? He added, after the removal of Sikhs History from 12th Class & claimed to be teach in 11th Class will cause loss to the students of 12th class of Open Schools. Because the students of Open Schools will directly does 12th class instead of 11thclass. With all these, the students who promoted to 12th Class in this year had lost opportunity to read Sikh History. Around 10 lakh students will endure this loss.

Harinderpal Singh while condemn about the addition of World History after the deletion of Sikh History said that when memories will erase then the nation will disappear. This is wrong to summarize the history of Freedom Fighters & revolutionaries in text books. In which Martyr Udham Singh took swear of “Heer” the lover of Ranjha in UK Court, blamed Bhagat Singh for Robbery, swag, unload from railways tracks and murder on the name of revolution were included. Shahi blamed Punjab Government for breaking History, to get down the history and to diminish the importance of local culture.
Sagoo while amazed on the statements to tell campaigns were common & unimportant held by Sikhs before independence said that it is necessary to repeat Sikh History in books.