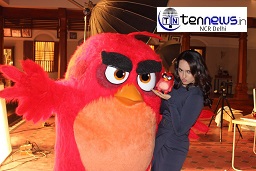 #SonakshiSinha is ANGRY and gets awarded for that! Sonakshi Sinha is ANGRY and gets awarded for that!

The superstar who has never shied from expressing her anger towards the unnecessary internet trolls, gets rewarded with ‘The Angries’, a special award by the Angry Birds Movie

Anger is not all bad, especially when it is for a good reason. That’s what The Angry Birds Movie is all about! Based on one of the most popular games of the recent times, the movie finally solves the mystery of ‘Why these Birds are so Angry?’ As we unfold the mystery, the birds are on a hunt to find the celebrities who are Angry and have a good reason to be so.

The first celebrity to be conferred with The Angries is Shotgun junior Sonakshi Sinha for being Angry at Cyber Bullying. While Sonakshi has been ruling the silver screen with her powerful performances, she has often faced the ugly side of social media platforms with incessant trolls. The firebrand has always taken her trolls head-on and often expressed her anger at people’s judgmental remarks/ views on the Internet.

The superstar is delighted to have been conferred with this award and was heard saying, “Any kind of bullying is wrong! Stand up for yourself, be strong, be true, be you!”

Aren’t we glad that Sonakshi is angry at cyber bullying, we think we all should be!

#SonakshiSinha is ANGRY and gets awarded for that!
Share FacebookTwitterGoogle+ReddItWhatsAppPinterestEmail