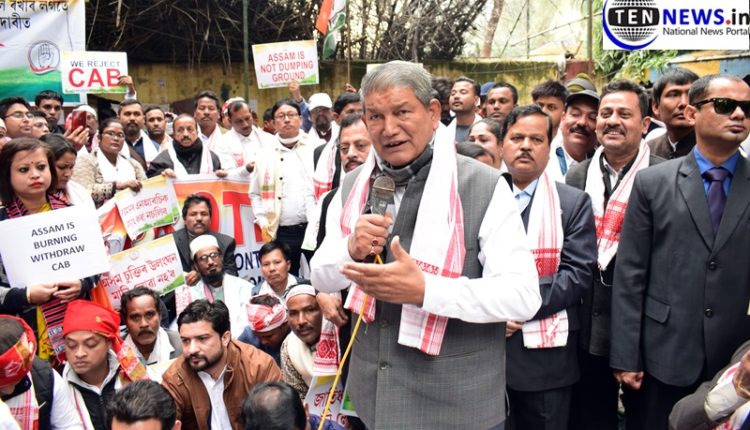 New Delhi : When Most of Assam’s Brahmaputra Valley erupted in spontaneous protest against the Citizenship Amendment Bill 2019 as the bill got the nod from President of India. Students, activists, writers, actors, musicians and people from all walks of life thronged the streets to voice their angst against the bill, which they believe will pose a serious threat to not only their livelihood and political destiny but also to cultural and linguistic identity.

We tried our best to make realize this government that they are breaching the article 14 by bringing this Bill. Now the government is playing with the fire and the consequences will be serious. People there are violating the curfew taking up to streets that too not in influence of any political party, but their emotions making them to do so. The government has violated the Assam accord.

Further he said ” The Congress party has several times sacrificed their government to insure peace and prosperity in North Eastern States. But now the BJP is violating all the constitutional barrier just for the political gain ”

Student gathered at Jantar Mantar also shared their misery while protesting and said ” We are not aware of the well-being of our parents internet services are disrupted and a situation of complete lock down there. We want to aks Mr Modi and Amit Shah is this a democracy. People are not getting able to come out of their homes, hospitals are closed.

“We want to urge the government that this bill is against Assam accord and at any cost we the people of Assam will not accept it.”

Tarun Gogoi also expressing his concern said why we are here? . We are here to remind government that please don’t ignore us we to are integral part of this country. You can see the consequences now Kashmir is facing because of similar negligence.

The new amendment to the Citizenship Act of 1955 aims to provide Indian citizenship to Hindu, Sikh, Buddhist, Jain, Parsi and Christian refugees from Afghanistan, Bangladesh and Pakistan. A person belonging to any of these faiths – who entered India on or before December 31, 2014 and have lived in the country for six years – can apply for Indian citizenship.