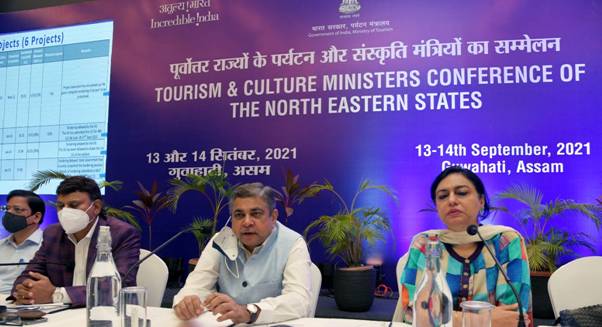 The two-day conference of Tourism and Culture Ministers of North Eastern States organized by the Ministry of Tourism, Government of India successfully concluded in Guwahati today. The conference was inaugurated yesterday by G. Kishan Reddy, Union Minister of Tourism, Culture and DoNER and Himanta Biswa Sarma, Chief Minister of Assam.

Arvind Singh, Secretary Ministry of Tourism Government of India while addressing the second day of the two-day conference said that the conference has been successful in apprising the participants about the several projects and initiatives being undertaken by the Central Government for the development of the northeast region. He also said that the several unique initiatives have been taken up by several states of the North East and the experiences shared by the participating states have been very encouraging.

The second day deliberations in the Conference were on the Progress of the projects sanctioned under the Swadesh Darshan and PRASHAD scheme.

While discussing on the topic, Rupinder Brar, Additional Director General said that under the Swadesh Darshan Scheme, tourism department focuses on integrated development of theme-based tourist circuits, while adding that the Ministry has sanctioned 16 projects in the North Eastern region. She further added that the ministry is giving special emphasis on developing infrastructure, ground capacity and skills in the Northeast region. She emphasised on the fact that the tourism ministry is also providing branding and marketing assistance to the northeast region through its various schemes and flagship initiatives.

The session was also attended by Rakesh Kumar Verma, Joint Secretary, Ministry of Tourism, Government of India and other delegates from North Eastern states.