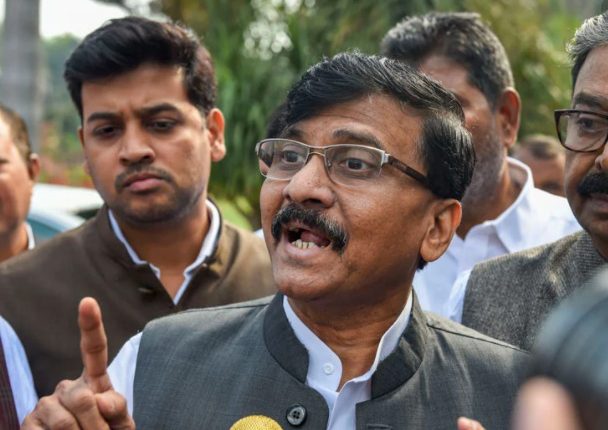 The way Rahul Gandhi was pushed, manhandled, it is a ‘gangrape’ of democracy, says Sanjay Raut

Not the one known for mincing his words, Shiv Sena MP Sanjay Raut on Friday made a shocking statement by referring to Rahul Gandhi’s alleged manhandling by UP police yesterday as the “gangrape of democracy”.

“Rahul Gandhi is a national political leader. We may have differences with Congress but nobody can support Police’s behaviour with him…His collar was caught and he was pushed to the ground, in a way it is gangrape of the country’s democracy,” said Raut.

He also cited that Gandhi scion was the son and grandson of former Prime Minister’s respectively and hence such behavior is unacceptable.
|
“We should not forget that Rahul Gandi is Indira Gandhi’s grandson and Rajiv Gandhi’s son. Both of them have sacrificed for the country. The country will never forgive this behaviour done to Rahul Gandhi. The way in which action is being taken against Rahul Gandhi and others who raise voice is against the democracy of the country,” Raut added.

Yesterday, while Rahul and Priyanka were trying to find their way to Hathras to meet the family of gangrape victim, they were stopped on Yamuna Expressway by the police. During the attempt, some scuffled followed and Rahul was seen falling on the ground.

Both Congress leaders alleged they were manhandled and roughed up by police personnel while they were marching towards Hathras to meet the victim’s family. However, Noida Additional Deputy Commissioner of Police (ADCP) Ranvijay Singh said that there was “no lathi charge” on anyone.

A case has been registered against Congress leaders Rahul Gandhi and Priyanka Gandhi Vadra, and over 200 others under section 188, 269 and 270 of the Indian Penal Code (IPC) and the Epidemic Act, according to the Gautam Buddh Nagar Police.

Ministry of Jal Shakti celebrates Swachh Bharat Diwas, 2020 on occasion of Gandhi Jayanti with the distribution of Swachh Bharat Puraskar