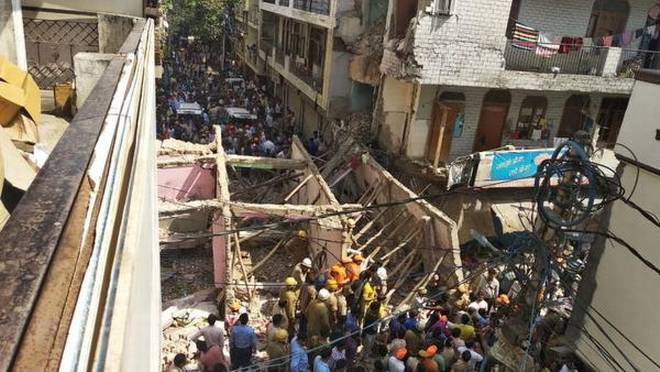 A three-storey building collapsed in New Delhi’s Ashok Vihar Phase 3 on today morning killing a woman, two brothers aged around 10 years, a boy and his sister aged below five years. For now a total of nine have been brought out of debris and many still feared trapped under the debris. Today morning at 09:05 am at A-43 Sawan Park building built in 25 sq.yard area got collapsed.

He also visited the site of collapse with officials. Announced a compensation of Rs. 5 lakh to the families of deceased and ordered a magisterial enquiry.

After the incident North DMC Mayor Preeti Aggarwal also visited the incident site around 2:30 in the noon to take stock of the situation and given direction to the officials present there. As per the information Building was told to be 20 years old and in structure was weak and in a deteriorated condition

Team of six fire tenders immediately was rushed to site after the incident while NDRF teams are carrying out the rescue operations. Local people staying near the incident spot have been helping and rescuing the victims along with the rescue team officials. A case of negligence is being registered in the incident.