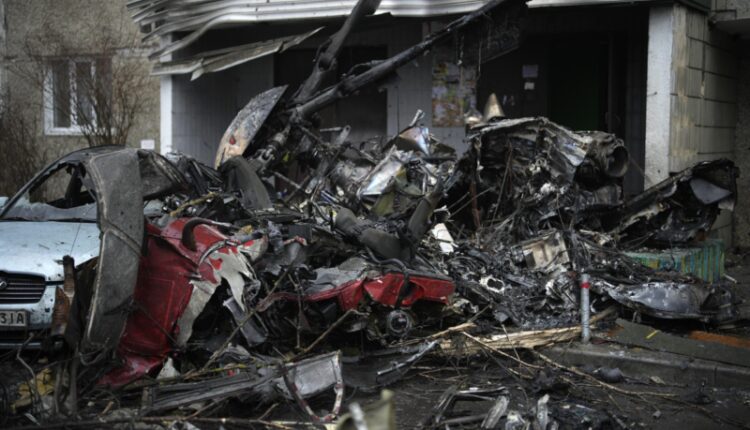 Ukraine (18/01/2023): Ukraine is mourning the loss of three of its top Interior Ministry officials after their helicopter crashed in an eastern suburb of Kyiv on Wednesday.

Interior Minister Denys Monastyrsky, 42, and his first deputy minister and state secretary were among the nine people killed in the crash, which also resulted in the deaths of nine people on the ground, including three children.

The interior minister was reportedly en route to a war “hot spot” when the accident occurred. According to reports, the helicopter was a French Super Puma aircraft and belonged to Ukraine’s state emergency service.

Local resident Volodymyr, who witnessed the crash, said “It was very foggy and there was no electricity, and when there’s no electricity there are no lights on the buildings.”

The tragedy has been felt throughout the country, with Kyrylo Tymoshenko, the deputy head of Ukraine’s presidential office, noting the minister had played a key role in updating the public on casualties caused by Russian missile strikes since the country was invaded in February 2022.

Interior ministry adviser Anton Herashchenko paid tribute to the fallen officials, saying they had worked to make Ukraine stronger. “We will always remember you. Your families will be cared for,” he wrote on Facebook.

The Ukrainian government has vowed to continue the work of the Interior Ministry despite the loss of its leaders, with Mariia Mezentseva, a friend and MP of the minister, saying the loss was a tragedy for everyone.

The cause of the crash is still under investigation

Samsung in Dispute with Indian govt over $110 Million Production Incentives

Explosion at Mosque in Peshawar, Pakistan Kills 83 and Injures 150