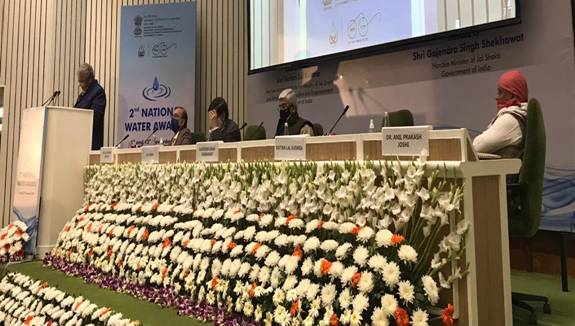 Addressing the gathering, Shri Shekhawat said the entire world is grappling with Covid-19 pandemic and there is no one who is notgetting affected by it. Similarly, he said that problem of water is faced by the entire world. In India also, over 100 crore people are affected by water issues even today that shows the enormity of the challenge at hand. It is in this context that the winners of these Awards deserve a special applause for playing their part in finding solutions to the water problems in their areas. He said that the world needs to come together to face challenges in the water sector in the same way as the world got together to fight the Covid-19 pandemic. He emphasised that all of us should introspect and look for opportunity in calamity. Shri Shekhawat also stressed on the importance of water to ensure country’s food security.

Shri Shekhawat said that under Jal Jeevan Mission, our Prime Minister’s vision is not just to provide drinking water to all households but also generate an awareness that will bring a transformation in water conservation and will help in making India a Jal Samridh country. He said that Jal Jeevan Mission is a game-changer in the water sector. The Hon. Minister also emphasized on the importance of aquifer recharging for sustainable groundwater management which is being done by the Ministry through aquifer mapping and Atal BhujalYojana. He said that today’s function is a right step in the direction of making Jal Shakti a people’s movement. He added that it is everyone’s duty to come together to face the challenge in water sector and hand over a water rich country to the younger generation as water in fundamental to life.

Jal Shakti Ministry is committed to the cause of Jal Samridh Bharat: Shri Rattan Lal Kataria

Congratulating all the winners, Minister of State for Jal Shakti, Shri Rattan Lal Katariasaid that the Ministry is committed to the cause of Jal Samridh Bharat. He lauded the Dynamic leadership of Prime Minister Shri Narendra Modi for addressing the water related issues in a holistic and comprehensive manner by establishing the Ministry of Jal Shakti.He complimented the Union Minister for Jal Shakti for taking the Ministry to newer heights with his commitment. Shri Kataria said that National Water Awards is a right step in the direction of spreading the message of water conservation and serves as a platform where all stakeholders can come together. He urged everyone to judiciously use water and believed that the Awards will help in bringing about a behavioural change in the water sector.

Shri Kataria said that India has a glorious past & was blessed to have a rich heritage where Water has been accorded the status of “God”. He quoted Rig Veda and Atharva Veda that define water not only as a purifier but also sustainer of life on this planet.He cited the contemporary challenges like water pollution, depleting ground water sources/aquifers etc. owing to mounting population pressure and developmental needs.Shri Kataria listed the achievements of Ministry, in the very first year, especially in the direction of giving 87 lakh pipe connections of potable water to the rural households, a task that was ignored by earlier Governments.

Shri U.P. Singh said that he would not call India a water stressed country as it gets a rainfall of more than 1000 mm annually. He pointed out that what we need is effective management of water, which is the need-of-the-hour. Talking about the 5Rs, he said that we should focus on reuse, reduce, recycle, recharge and respect. He also emphasized on the role of district administration in effective management of water and said that India will have to become self-sufficient in the water sector.

Congratulating the winners of the Awards, Shri Anil Joshi stressed on the importance of the combination of Jal Shakti and Jan Shakti to bring about a transformational change. He also emphasized that water should be given the respect as has been done in the past in India and such values will have to be inculcated in the younger generation. He talked about the “ecological responsibility”of every citizen of the country and said that prosperity (Jal Samridhi) is a better word to express the sentiment that is required in the water sector, which will also give better results. Shri Joshi also talked about the concept of Gross Environment Product that he believed should become part of the collectiveconsciousness of the country.

Welcoming the guests, Shri Rajiv Ranjan Mishra, DG, NMCG apprised the audience about the steps being taken under NamamiGange Programme and said that people’s participation is central to the success of Clean Ganga Mission.

The aim of the National Water Awards is to acknowledge individuals/organizations doing commendable work in the field of water conservation and management. Also, it strives to create awareness among the people about the importance of water and motivate them to adopt the best water usage practices.

The National Water Awards not only focused on the good work and efforts made by individual and organisations across the country, it was a right step in the direction of government’s vision of a ‘Jal Samridh Bharat’. The event provided a good opportunity to start-ups as well as leading organisations to engage and deliberate. The ceremony also provided an occasion for all people and organisations to further cement a strong partnership and engender stakeholders’ engagement in water resources conservation and management.

The National Water Awards 2019 was launched in September 2019 on MyGov portal and entries were also invited by Central Groundwater Board. The Jury Committee was headed by Shri Shashi Shekhar, Former Secretary, Department of Water Resources, River Development and Ganga Rejuvenation. Two Screening Committees with members from CGWB and CWC assisted the Jury Committee in studying the applications and selecting the winners.National Water Awardees, delegates and audience joined LIVE through virtual platform.