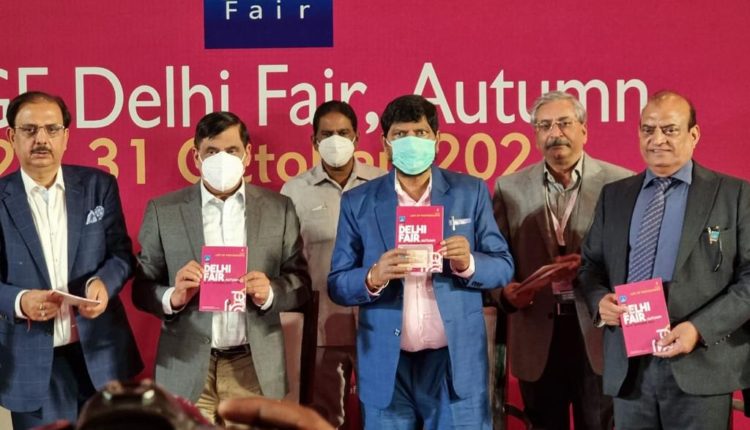 While addressing the gathering, Ramdas Athawale, Union Minister of State for Social Justice & Empowerment, Govt. of India, expressed his happiness and surprise to see the first physical fair after the pandemic and appreciated the efforts of EPCH. Athawale was happy to note participation of several artisan clusters, the results of which would go a long way in empowering those striving at the grassroots level. He assured of his ministry’s support towards EPCH’s future endeavours in empowering artisans and crafts persons across varies segments of the sector. Such shows are instrumental in nurturing their potential, he emphasised.  Commending EPCH on the multi- dimensional and wholesome representation of the entire industry, Athawale hoped to see the fair grow in all aspects in future.  After 3 virtual editions, as buyers and sellers come face to face after a gap of two years, for the 52nd IHGF Delhi Fair, the Minister wished fruitful business and strong ties for all.

Speaking at the inauguration ceremony of the fair, Mr. U P Singh, Secretary Textiles, Ministry of Textiles said that it is commendable that even during the pandemic when all physical activities were on hold, EPCH was the first Council to organize its fairs on virtual platform and now when things are getting back to normal, the 52nd edition of IHGF Delhi Fair resumes its physical mode. He applauded the segment in contributing to an exemplary export growth of 60% during the 1st six months of 2021-22 despite difficulties & challenges faced by the exporters during the two years of the pandemic. “Now that the situation looks hopeful things could get better and more fruitful here on.” He added, “since the business of handicrafts and gifts entails touch and feel factor, I’m hopeful that the resumption of physical fairs would result in increase in the number of orders booked and business generated, thereby creating new jobs and opportunities for exporters, entrepreneurs and artisans.”

Piyush Goyal, Union Minister of Commerce & Industry in his message said, at a time when the world’s largest vaccination programme is in full swing, it is heartening to see the physical exhibition taking place, providing an opportunity for exhibitors & buyers to meet in person for transacting business. He hoped that this event will pave way for bigger and better editions of the fair in the near future, and in the process, promote greater exports of handicrafts from India.

Commenting on the fair, Shantmanu, Development Commissioner (Handicrafts) appreciated the inclusion of several regional artisanal products from J&K, Rajasthan, Southern and North Eastern Regions, in Theme and Collective Presentations at the show, especially those made from eco-friendly and natural materials. He hoped that the display of these items would certainly create awareness and demand of these products amongst the visitors.

Raj Kumar Malhotra, Chairman, EPCH, welcomed all to the 52nd edition of IHGF Delhi Fair and mentioned that it has been proved once again by the Council that with sheer hard work and dedication one can always overcome difficult times and convert challenges into opportunities. “This edition of the IHGF Fair facilitates in-person interactions and provides a viable marketing option to the exhibitors and buyers. With an extensive publicity campaign undertaken by EPCH, a large number of overseas buyers, wholesalers and retailers have already registered to visit the show,” he added.

Reflecting on the optimistic sentiment of the handicrafts industry, Dr. Rakesh Kumar, Director General, EPCH, said, “Post initial desperation during the pandemic, our members went into strategic and creative use of resources to develop new products and adopt lean manufacturing ideas. With their preparedness, India is steadily gearing to be the preferred supplier in home, lifestyle, fashion, textiles and furniture products.” He further informed about Theme Pavilions depicting crafts from North Eastern Region, Jammu & Kashmir, Rajasthan and Southern Region with a plethora of vibrant lines that will be among attractions for the visiting overseas buying community.

EPCH is a nodal agency for promoting exports of handicrafts from the Country to various destinations of the world and projecting India’s image abroad as a reliable supplier of high quality handicrafts goods & services. The Handicrafts exports during the Six months of current financial year from April to September, 2021-22 is Rs. 15995.73 Crores registering a growth of over 60.34% over the same period in last year.

BJP hits a new low; not giving salary to MCD employees even in the festive season