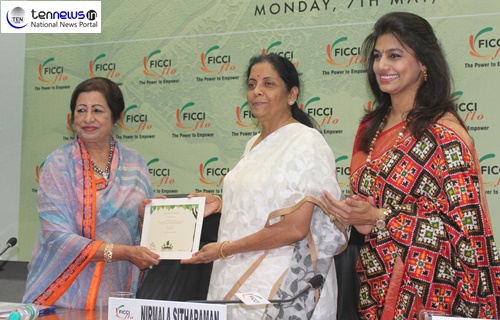 New Delhi: Union Defence Minister Nirmala Sitharaman on Monday said unlike others I entered into the politics very late and but I perform better unlike other and got important portfolios under NDA government.
She shared her views while speaking in an event organised by the FICCI Ladies Organisation (FLO) titled ‘Stories That Matter: Journey of India’s first full-time Defence Minister’ in Delhi.

Nirmala Sitharaman is India’s first woman Defence Minister after Indira Gandhi, who handled the portfolio during her tenure as the prime minister over three decades ago.
Later, she also released a report, prepared by FLO on ‘Gender Parity Index – A toolkit to evaluate gender Diversity & Empowerment of Women in the formal sector in India.’
While speaking in the event she further said, “The Mudra scheme of the Union government to provide funds to start a business has proved very crucial for women. Of 100, 50 to 55% of the benefiter is women.”

In the following programme, FLO President, Pinky Reddy said, “FLO is the most apt platform to connect, learn and grow. We recognise the success stories of women who break all stereotypes and provide a platform for the members to be inspired by them. This programme was an excellent opportunity to be motived by the inspiring journey of an economist, to a politician and then to being the Defence Minister of this great nation.”

Unlike other I entered into politics very late but achieved much: Defence Minister N Sitharaman
0 413
Share FacebookTwitterGoogle+ReddItWhatsAppPinterestEmail