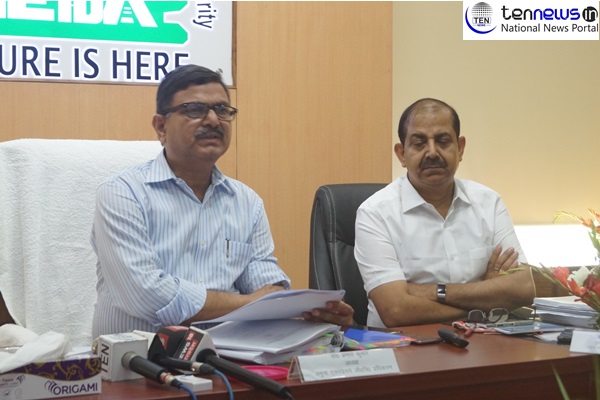 A budget of 3,897 crore has been allocated for the financial year 2018-19 which is 78% higher than the last year budget which was 2,174 core. In this financial year aim is for generating 2809 crore as total revenue has been been targeted by Authority.

The issue which is considered most important is the pending compensation of farmers which is around 1400 crore which will be given to farmers.
This year authority will spend 1200 crore rupees on the development works. Out of 1200 crore 100 crore has been allotted for villages and a private agency will also be hired to carry out developmental works in villages as last year funds allocated to villages remained unused. 80 cleaning staff will also be appointed for the villages and each village will have one staff and on every 10 village there will be a supervisor for monitoring the sanitation work.

For ensuring the direct connectivity between Jewar and Delhi airport a feasibility report will also be prepared. Some of the builders had siphoned off the money and used it in another projects. Now action will be taken against such builders their lands will be sold out and the money that will be raised from it will be invested in development works in the same area by involving a co-developer. In this probe FIR will also be registered against two builders.

In an Institutional land allotment scheme by authority officers of that that time allotted the land on lower rates as from actual rates. Now YEIDA has calculated the actual rate that is 1041ruppes per square meter and after including the interest the amount will be recovered from the allottees. After this decision a number of prominent intuitions of the city may face the trouble. FIR will also be registered against Officers those who are involved in this case.

Concerning safety measures over Yamuna Expressway a hike in toll tax rates will also be effected. The hike will be of 5 to 15 paisa per kilometer and the new rates will be applicable from 1 June.