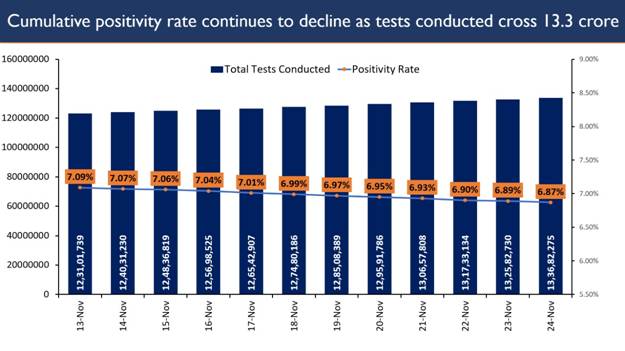 India’s testing infrastructure has seen a significant boost with 2,134 labs across the country. Keeping in line with its commitment to conduct more than one million tests every day, 10,99,545 samples were tested in the last 24 hours. India’s total cumulative tests cross 13.3 cr (13,36,82,275).

An average of more than 10 lakh tests conducted daily has ensured that the cumulative positivity rate is sustained at low levels and is presently following a downward trajectory.

There has been a sustained decrease in the number of active cases over the past few weeks.

75.71% of the new recovered cases are observed to be concentrated in 10 States/UTs.

Delhi has reported the maximum number of single day recoveries with 7,216 newly recovered cases. 5,425  people recovered in Kerala followed by 3,729 in Maharashtra.

Delhi continues to report the highest daily new cases at 4,454. Delhi is followed by Maharashta with 4,153 new cases.

480 case fatalities have been reported in the past 24 hours.