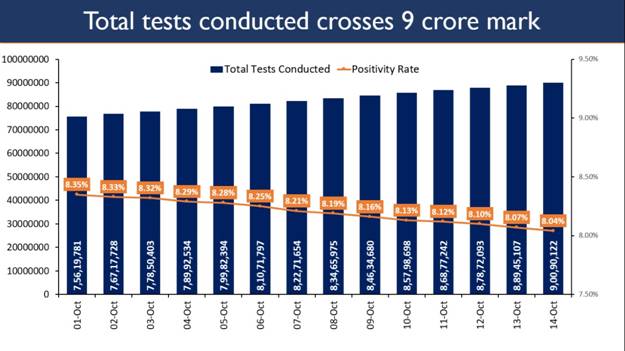 Updates on Covid-19 : Total Tests cross a Record of 9 cr

India has demonstrated an exponential increase in the number of COVID-19 cumulative tests since Jan 2020. It has crossed the landmark of 9 crore total tests today.

The country’s testing capacities have multiplied manifold with more than 1900 labs across the country and with collaborative efforts of the Centre and State/UT governments. More than 15 lakh samples can be tested every day. 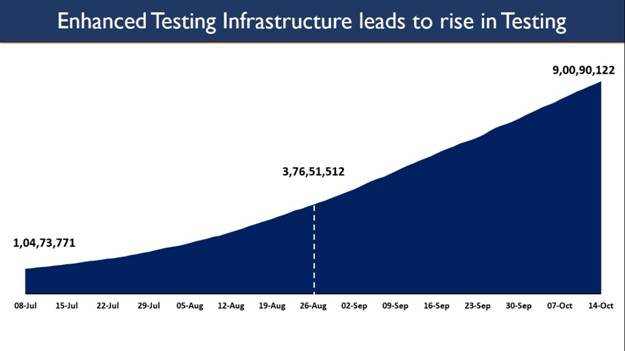 Progressive expansion in testing infrastructure has played a crucial role in the steep rise of testing numbers. With 1935 testing labs in the country including 1112 Government laboratories and 823 Private laboratories, the daily testing capacity has got a substantial boost.

Very high countrywide testing on a sustained basis has also resulted in bringing down the national positivity rate. This indicates that the rate of spread of infection is being effectively contained.

20 States/UTs have positivity rate less than the national average. The cumulative Positivity Rate is 8.04% and is on a continuous decline. 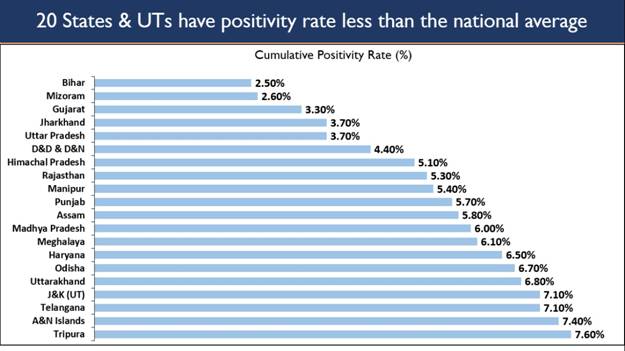 India is registering new recoveries more than the new cases consistently in the recent days. As a result, the active cases are steadily declining and stand at 8,26,876 as of today and comprise only 11.42% of the total positive cases of the country.

74,632 COVID cases have recovered and discharged in the last 24 hours whereas the new confirmed cases stand at 63,509. Higher number of recoveries has aided the national Recovery Rate to further improve to 87.05%.

The total recovered cases stand at 63,01,927. The gap between Recovered cases and Active cases is 54,75,051. With increasing number of recoveries, this gap is continuously widening.

Maharashtra continues to contribute the maximum with more than 15,000 single day recoveries. 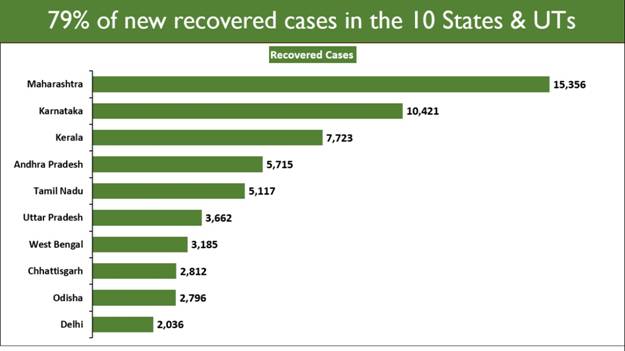 77% of the new cases are from 10 States and UTs. Kerala has outnumbered Maharashtra with the highest number of new reported cases. 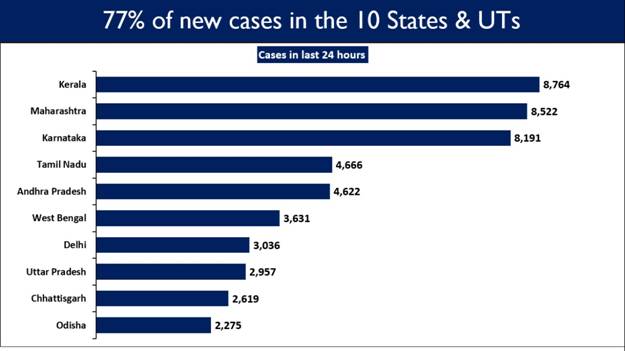 730 case fatalities have been reported in the past 24 hours. Of these, nearly 80% are concentrated in ten States/UT.

More than 25% of new fatalities reported are from Maharashtra (187 deaths). 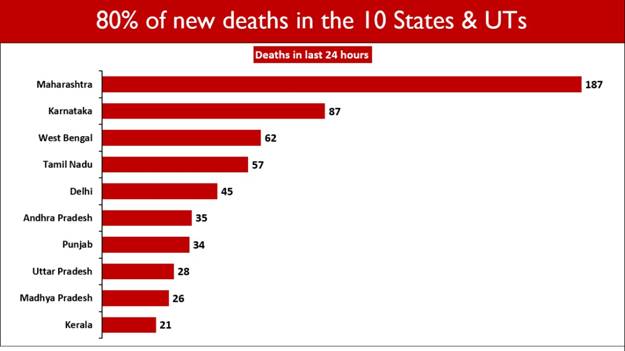 Almost all States/UTs of the country are affected by COVID-19. Given the seasonal pattern of epidemic prone diseases observed every year in our country like Dengue, Malaria, Seasonal Influenza, Leptospirosis, Chikungunya, Enteric fever, etc., can not only present as a diagnostic dilemma but may co-exist in COVID cases. This poses a challenge in clinical and laboratory diagnosis of COVID, and has a bearing on the clinical management and patient outcomes. Ministry of Health and Family Welfare has issued Guidelines for management of co-infection of COVID-19 with other seasonal epidemic prone diseases.

This can be accessed at: