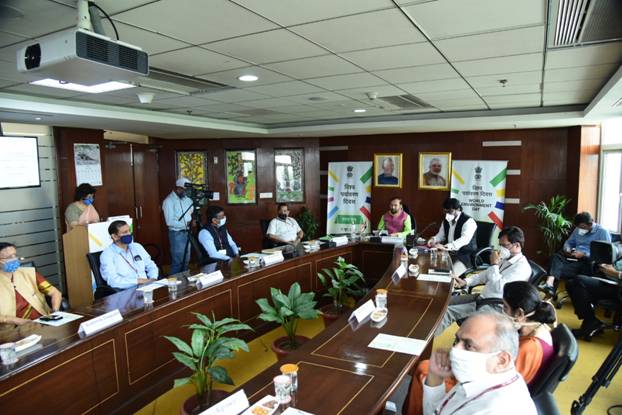 On the occasion of World Environment Day, the government today announced implementation of the Nagar van scheme to develop 200 Urban Forests across the country in next five years with a renewed focus on people’s participation and collaboration between Forest Department, Municipal bodies, NGOs, Corporates and local citizens.World Environment Day (WED) is celebrated on 5th June every year.  Ministry of Environment, Forest & Climate Change celebrates WED focusing on the theme declared by United Nation’s Environment Programme (UNEP) and organizes several events.  This year’s theme is ‘Biodiversity’. In view of the prevalent situation due to COVID-19 pandemic the ministry held virtual celebrations of World Environment Day on this year’s theme with focus on Nagar Van (Urban Forests).

Releasing a brochure on the best practices on Urban Forests and announcing the Nagar Van scheme, Union Environment Minister, Shri Prakash Javadekar said that these forests will work as lungs of the cities and will primarily be on the forest land in the City or any other vacant land offered by local urban local bodies. Stressing on  this year’s theme i.e. “Time for Nature” with special focus on biodiversity, Shri Javadekar said “thumb rule is that if we protect nature, nature protects us” .

On #WorldEnvironmentDay announced the Urban Forest scheme to develop 200 ‘Nagar Van’ across the country in next 5 years.
This will help revive the age old tradition of village forest in cities.#ForNature pic.twitter.com/G18JHsebti

A film was played during the Environment Day Celebrations today which narrates how the initiatives of Punaikars along with Forest Department and local body has converted 16.8 ha of a barren hill into green forests. Today, the forest is rich in biodiversity with 23 plant species, 29 bird species, 15 butterfly species, 10 reptiles and 3 mammal species. This Urban Forest project is now helping maintain ecological balance, serving both environmental and social needs. The Warje Urban Forest is now a role model for the rest of the country.

Stressing on this year’s focus on Biodiversity the Environment Minister said ,“India has 8 percent of world’s biodiversity, despite having many constraint like only 2.5 % of the world’s landmass, has to carry 16% of human as well as cattle population and having only 4% of fresh water sources; the mega biodiversity that we have is the result of Indian ethos which is to be in sync with the nature.”

Despite having many constraints like only 2.5 % of the world's landmass, with 16% of human as well as cattle population, India today has nearly 8 percent of world's #biodiversity. #WorldEnvironmentDay2020 pic.twitter.com/nz3XT5ug3b

Highlighting the Indian culture, Shri Javadekar said that “India is probably the only country where trees are worshipped, where animals, birds and reptiles are worshipped and this is the respect Indian society places for environment. We had a very important tradition of village forest since ages, now this new scheme of urban forest will fill up the gap because urban areas have Gardens but very rarely forests; With this activity of creating urban forest we will also create additional carbon sink, said the Union Minister.

Also present on the occasion Union Minister of State Shri Babul Supriyo, emphasized on Tree plantation and soil moisture conservation works as a core strategy for biodiversity conservation in the country. He emphasised that to address the problems of soil degradation, siltation and reduced water flow in the river basins and everyone has to work collectively.

The UNCCD executive director, Mr. Thaw said that “Is it not time, that we realise that we need nature more than nature needs us, if at all. Is it not time, that we have the humility to rethink and redefine our relationship with nature. Perhaps, it is time for humanity to have a new social contract for nature.”

Stressing on this year’s theme Ms. Andersen said that actions for nature means a lower risk of future pandemics, achieving the sustainable development goal, slowing climate change, healthier lives, better economies, being able to cherish that breath of fresh air or walk in the woods protecting life itself. In a post COVID world, we need to build back better, we need to protect the planet to protect ourselves.

India is endowed with rich biodiversity having several species of animals and plants and hosts 4 of the 35 global bio-diversity hotspots containing several endemic species. However, increasing population, deforestation, urbanisation and industrialisation have put our natural resources under tremendous pressure causing loss of biodiversity. Biodiversity is vital for survival of all life form on this planet and is a key to providing various ecological services. Biodiversity conservation has traditionally been considered confined to remote forest areas but with increasing urbanisation a need has arisen to safeguard and save biodiversity in urban areas also. Urban forest is the best way to bridge this gap. The Ministry of Environment, Forest & Climate Change has therefore, appropriately adopted Nagar van as the theme of WED celebrations 2020 to promote and conserve biodiversity in urban landscapes.

To view the brochure on Urban Forest through People Participation Click here.