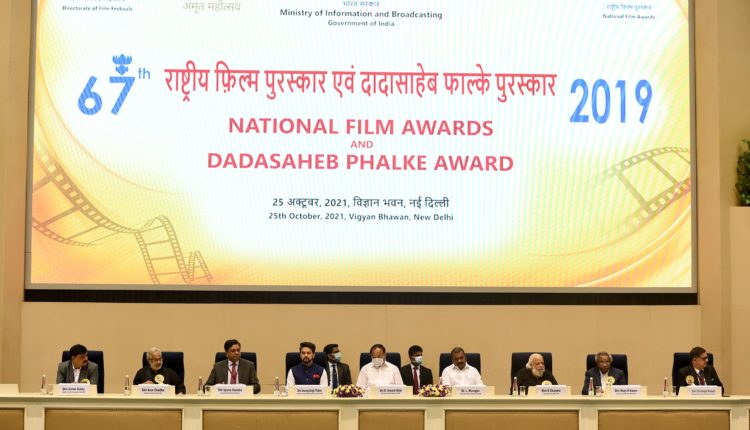 Speaking after presenting the prestigious DadasahebPhalke award to popular actor Rajnikanth and national awards to actors of cinemas of various languages, the Vice President said a film should be a vehicle with a higher purpose—a carrier of social, moral and ethical message. “Moreover, films should refrain from highlighting violence and should voice society’s disapproval of social evils,’ he added.

Observing that a good film has the power to touch hearts and minds, Naidu said cinema is the cheapest entertainment in the world and urged filmmakers and artists to use it for the betterment of the people, society and nation.

Stressing the need for cinema to usher in positivity and happiness, he said “Experience tells us that a film with a message has lasting appeal”. Apart from entertainment, cinema also has the power to provide enlightenment.

The Vice President advised the cinema industry not to do anything that weakens the great culture, traditions, values and ethos of our grand civilization. Indian films carry an important message to audiences across the world. They should portray a snapshot of ‘Indianness’ or ‘Bharatheeyatha’ to the outside world and need to be effective ambassadors in the world of cultural diplomacy, he stressed.

Referring to India’s soft power as the largest producer of films in the world, he said that our films are watched and appreciated across the world—in Japan and Egypt, China, the United States, Russia, the Middle East and Australia, and a host of other countries. “Films are among our foremost cultural exports and serve as a key link in connecting the global Indian community to the rhythms of life back home’, he added.

Observing that Cinema has no geographical or religious boundaries and speaks a universal language, he said the National Awards not only highlight the talent pool in the Indian film industry but also reflect its richness and diversity.

Congratulating Rajnikanth for winning this year’s DadasahebPhalke Award, he said that the iconic thespian’s unmatchable style and acting skills have indeed given a new dimension to the Indian film industry. Mentioning his memorable performances in MoondruMudichu, Sivaji: The Boss, Vayathinile, Bairavi, he said the Thalaivar epitomizes the perfect balance between artistic expression and mass appeal, something all young film-makers could do well to attempt.

The State of Sikkim received the most film-friendly state award.