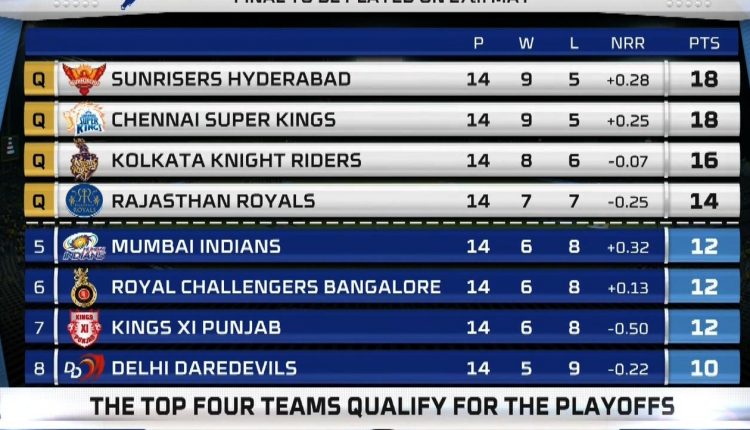 New Delhi: After MS Dhoni seals the match in his vintage style by hitting a six.chennai super kings beat Kings XI Punjab by five wickets and

The league stage of IPL 2018 came to a close on Sunday with Rajasthan Royals becoming the fourth and final team to progress to the play-offs stage of the league’s 11th season, bringing to an end a 56-game streak that saw several franchise script some amazing runs of form.

On the other hand, Defending champions Mumbai Indians out of the Indian Premier League after losing to the Delhi Daredevils by 11 runs. The Rohit Sharma led Mumbai, winners in 2013, 2015 and 2017 suffered their eighth loss in 14 season matches of IPL 2018.

Second placed Chennai Super Kings five-wicket win over Kings XI Punjab in the league stage’s final match confirmed that Rajasthan Royals became the final team to seal a play-offs berth.Table-toppers Sunrisers Hyderabad and two-time title holders. CSK has qualified for the play-offs in all the 9 seasons they played in IPL.

Intresting fact is both teams returning from suspension have made the playoffs. All four teams in playoffs have won the IPL previously.