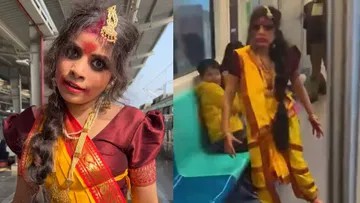 The video shows the woman, dressed in a yellow saree and dishevelled hair, roaming around a Noida metro compartment and trying to scare passengers. In the footage, she is seen approaching a man who is sitting with his headphones on, aggressively tapping on his shoulder, and forcing him to vacate his seat.

The video has received mixed reactions from viewers, with some calling it “harmless fun,” while others have criticized the woman for disturbing other passengers, particularly children.

Authorities are now trying to identify the woman in order to initiate action against her.

Another video of a man dressed as a character from the Netflix show “Money Heist” has also surfaced on the internet.

This incident comes after another video emerged online of a woman dressed as “Manjulika” pranking people at the Laxmi Niwas Palace in Rajasthan’s Bharatpur.