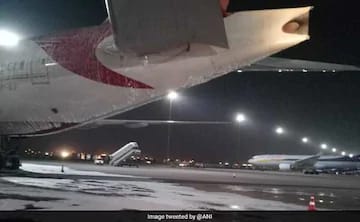 New Delhi : (25/04/2019) An empty Air India plane on Wednesday night caught fire during repair at Delhi’s Indira Gandhi International Airport. The airline, in a statement, called it a “minor incident”.

The engine of the Delhi to San Francisco flight caught fire during AC repair.

When an engineer was doing a routine technical examination of the empty aircraft (777) at the Delhi airport on Wednesday night, auto shutdown of the auxiliary power unit (APU) took place, the airline said. The fire was doused immediately.

Airport personnel observed black fumes from the APU exhaust and, believing it to be a fire hazard, sprayed APU and part of the fuselage with foam spray, the national carrier said.

The APU is the smallest engine on an aircraft and situated at the tail of it. It provides the necessary power to start the main engines.