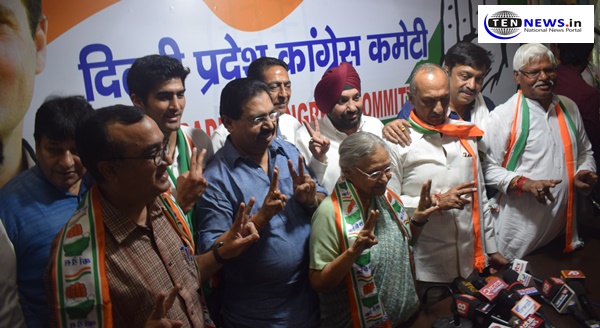 Boxer Vijender Singh who is standing from South Delhi Lok Sabha Constituency was also present at the gathering. Many of the candidates took out road shows in the scorching heat in their constituencies before filing their nominations.

Talking to reporters, Dikshit, who has been fielded from North-East Delhi, said, “I have sentiments attached to this seat as I had fought my first election in Delhi from this seat.”

There was much speculation around who would be the grand old party’s candidate from the North West Delhi constituency, Congress decided to go with Rajesh Lilothia.

Over the years Lilothia has taken top roles across various organisations. He has presided over the Delhi Pradesh Youth Congress. He was a Patron at the All India SC/ST Railway Employees Association (Regd).

Speaking to Ten News Rajesh said, “I never said yes for an alliance with AAP because that government is all based on lies and Congress do not need any alliance with such party.”

“I will be focusing on the living standard of poor and will arrange a living for them which will lead to their happy future”, he added.

Boxer Vijender Singh was when asked about his major aims, said, “I will mainly focus on the issue of unemployment. I will bring perfect job to the doorstep of every eligible person who is unemployed today.”

On the other hand Mahabal Mishra is again fielding from West Delhi Lok Sabha Constituency and when he was asked about the issues he will be caring about, he said, “Development is the only demand of the day and we will develop everything that needs improvement or a change. May that be roads, societies or any other basic requirements of delhiites.”