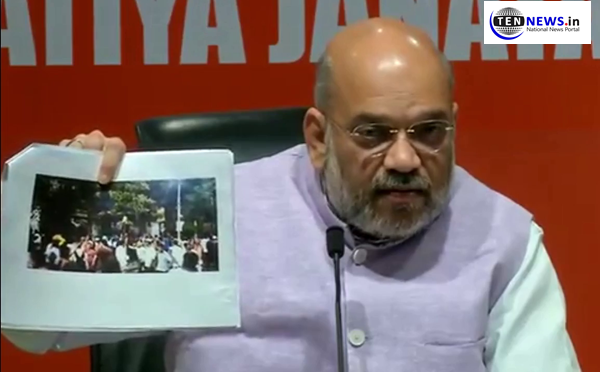 Amit Shah accuses TMC for violence in his roadshow, says “if CRPF was not there, i would have been killed by TMC goons”

New Delhi, (15/5/2019): BJP President Amit Shah today conducted a press conference in National Capital regarding the violence in his roadshow in Kolkata yesterday. The Bharatiya Janata Party and the TMC both accused each other for the violence.

While addressing the press conference Amit Shah said, “In 6 phase of polls, no violence took place anywhere in the country except West Bengal. Which makes evident that it is TMC indulging in violence and not BJP. Mamta Banerjee should understand she is fighting only 40 seats where as BJP contesting in all states but no incident of violence was reported from anywhere except West Bengal”.

“Right from beginning, there was an attempt to incite the BJP workers as posters banners of Prime Minister were removed”.

He also shows pictures of the Vidyasagar College saying, the gate was closed before and after the violence. TMC workers were pelting stones from the campus. He also says that gate was not broken, then who vandalised the bust of Ishwar Chandra Vidysagar. Shah alleges the bust of Eshwar Chand Vidyasagar was vandalised by the TMC goons themselves.

Amit Shah says none except TMC had access to the college campus. And, Mamata Banerjee is making baseless allegations after the bust was damaged by the TMC goons purposely to malign the image of BJP.

Historysheeters were arrested in several states, but none was arrested in West Bemgal. I urge to the Election Commission to take action against the West Bengal government.

“He also said that, if there had not been the CRPF protection, it was impossible for him to move out safely from there”.

He challenged Mamata Government that “if Mamata Banerjee is honest and wants to find out who were responsible for attack on BJP event, she should set up an independent probe”.

BJP president also reacts to reported FIR against him in Kolkata and says “Mamata Didi, BJP workers are not scared of any such FIR. Over 60 people have been killed, still she could not intimidate the party”.

In the end he said that, i am confident that BJP has already crossed the full majority mark after six phases of polls. After seven phases, the BJP will cross the 300 mark and form government under Modi again”.