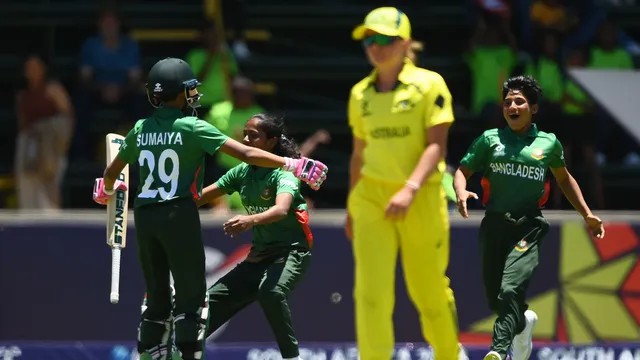 New Delhi (15/01/2023): Bangladesh made a stunning start to their U19 Women’s World Cup campaign, upsetting Australia in the tournament opener on Saturday. Chasing a target of 131, Bangladesh crossed the finish line with two overs and seven wickets to spare, and the celebrations that followed were wild.

Australia had scored 130/5 in their 20 overs. After opting to bat, Australia lost both openers, Kate Pelle (5) and Paris Bowdler (7), early and were reduced to 22/2. Claire Moora (52) and Ella Hayward (35) steadied the ship, but Australia could not break the Bangladesh bowling attack.

In reply, Bangladesh too were stunned after Misty Shaha was dismissed on the first ball of the chase. However, Afia Prottasha (24) and Dilara Akter (41) stabilized their innings with a 66-run stand before Shorna Akter (23 not out) and Sumaiya Akter (31 not out) took them across the finish line.

The victory against Australia is sure to send a message to the other teams in the tournament that Bangladesh means business and will be a force to be reckoned with in the Women’s U19 T20 World Cup.

Delhi: Fire breaks out in a building in Shakarpur area.