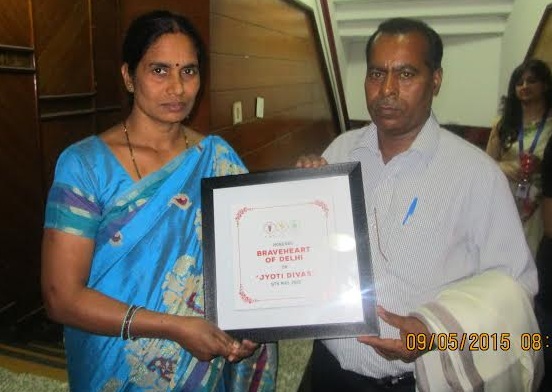 A special program with the theme “Speak out Loud” on Women Safety and Security” was organized in Siri Fort Auditorium by TBI Online on 9th May’2015 to pay flowing tributes to India’s braveheart Nirbahaya on the eve of her birthday on 10th May.

Besides the large number of distinguished personalities, a panel of eminent speakers vociferously shared the pressing concerns regarding women safety in the country along with the practical remedial measures to be undertaken. Nirbhaya’s parents Asha and Badri Singh were part of the event.

In an exclusive conversation with Tennews.in, Nirbhaya’s father Badri Singh shared, “Taking out candle light protest meets is not a permanent solution as the issue of women safety cannot become a reality unless citizens from all walks of life join forces by taking a pledge for women safety. Both I and my wife stand pledged for the cause of women safety and security for the rest of our lives. Besides seeking fast track justice for the atrocity done to our daughter, we also seek some sort of embargo on lawyers subjecting the rape victims and their families to excruciating humiliation during the trial process. As parents of Nirbhaya, who better than us can realize the trauma that the near and dear ones of victims have to undergo every day. In order to ensure that there are no future Nirbahaya like incidents, the entire society has to pledge their commitment. People should bear in mind that if they are mute spectators during any incident of crime against women, God forbids, their kith or kin too could find themselves stranded some day, with no help or respite in sight. ‘Rhetoric’ won’t suffice any longer, as ‘concrete action’ alone will usher in the much needed drastic transformation in the society.”

While lashing out at the double standards, social worker Veena Anand urged the society to give utmost importance to the subject of women safety. As the first speaker of the event, she said, “Women safety deserves top most priority, and there is an urgent need to brainstorm on the practical steps which will ensure its reality. Being complacent, or having a lax approach in matters concerning women safety would be completely ludicrous and imprudent as the security measures need constant reviewing and upgradation. The youth brigade has to be motivated for playing a proactive role in making the city and the country safe for girls and women.” Founder principal, St Mark’s School, Meera Bagh, Anjali Aggarwal lashed out at the double standards in the society. She was critical about the discrimination meted out to the girls in the society. She expressed serious concern on only girls being questioned by their parents about their whereabouts, in sharp contrast to the boys of the family who were usually being given leeway about their activities and antics. The disparity between girls and boys according to her was one crucial reason of the boys getting a feeling of being someone special compared to their sisters in the family. She emphasized upon the need to transform the overall thought perception about girls, rather than solely depending upon value based education to bring sea changes.

Manju Oberoi, Advocate-LexnLegal, Delhi High Court, pledged all the support of her fraternity towards sensitive matters such as women safety and well being. When asked why some lawyers subjected rape victims to an agonizing ordeal by posing embarrassing questions to them during the trial process, she suggested a way out wherein the victim’s family could approach the higher courts for lodging their complaints or grievance against lawyers found indulging in such gross violations of women dignity.

Chitra Tripathi, senior special correspondent and News anchor, India News Channel spoke about the crucial role of the media in not just reporting matters of crime against women, but also how they had been instrumental in ensuring that the misogynists are kept under a tight leash by the law enforcers. She spoke about the special initiatives undertaken by her channel through her program “Betiyan” which focused on girls who had accomplished feats withstanding all the challenges. She reiterated the relentless pursuit of the media in putting brakes on incidents of crime against women. She cited strong punitive action as an effective deterrent for curbing incidents of violence against women. Sharing the significance behind organizing the event, Vishal Salhotra, managing director TBI Online said, “Besides paying tributes to India’s braveheart Nirbhaya, one more core objective behind organizing this event on the eve of the brave heart’s birthday was to ponder over the safety measures being taken to ensure the safety and well being of women all over the country. Besides the role of police, it is the duty of every citizen to stand pledged for the cause of women safety. Through this initiative, we wish to convey loud and clear that no citizen should remain a mute spectator when they see a woman being subjected to any kind of atrocity. Irrespective of caste, creed, religion, city or country, citizens need to be with women in their moments of distress and need. The rising incidents of crime against women have brought colossal ignominy to the nation. Be it the growing number of rape cases, the ill treatment meted out to foreign tourists, or the racist attacks against the North East girls, or the countless of sexual harassment incidents at work, all this has severely tarnished the image of the country. Needless to say, this adversely impacts the national level campaigns such as Incredible India and Atithi Devo Bhavah. The image of the country takes a beating not only when foreign nations are shoddily treated, but also when misogynists unleash heinous crimes against their own people. The Uber cab rape case brought back the memories of the horrific Munirka gang rape incident of Nirbhaya that shamed the entire country.”

Remarked activist Sudha Bhardwaj, “The time has come when the citizens need to work in sync for undertaking a steel pledge to ensure the safety and wellbeing of women folk of not only their country, but also those who are visiting their country as ‘tourists’, or ‘students’. Rather than wearing their religious or caste cards on their sleeves, it would make great sense if the citizens of the country begin displaying their commitment towards pertinent issues such as safety of women. There are some organizations who can be motivated for hosting series of exclusive programs at prominent places with the core aim of brainstorming on key measures needed to be undertaken for making women safety a reality in the coming days. There is the grave need for launching an apolitical campaign wherein some select people are initially chosen to lead the women safety campaign from the front.”

Sneh Lata Garg, founder Anmol Moti Mahila Society said, “Our society was formed with the core objective of addressing the problems of women and for providing free medical amenities to impoverished segments of the society. It aches to see the growing number of cases of crime against women especially rapes and molestation. Though imparting training to women in self-defense skills is a great idea, the problem will get addressed only if we create an army of volunteers all over the country so that a strong message is sent to the serial offenders and misogynists. Why can’t people decide to shun wearing the religious or the caste card on their sleeves, and instead begin flaunting their commitment towards key societal issues such as women safety on their sleeves?”

In the end, a play highlighting the mindset of the perverts as well as the plight of the girls and women in the city was staged by young volunteers for sensitizing the masses towards the issue of women safety.

Ascent International School,celebrated its grand muchawaited Annual Event on the theme “The Sage – Not far from Enlightenment”.

Do you agree with it?