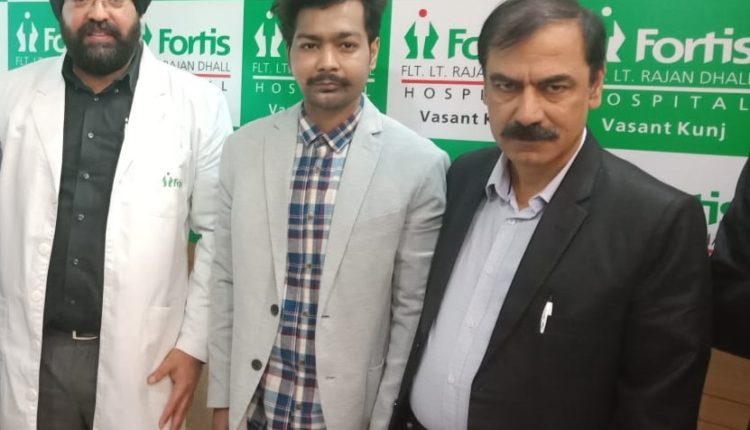 New Delhi (19/02/2020): Now, Prabhjeet can chew food properly after seven years after the doctors at Fortis Flt Lt Rajan Dhall Hospital in Vasant Kunj performed a unique and first of its kind procedure to re-construct his jaw using 3D Printing technology here in the city recently.

The titanium jaw was constructed using this novel technology and implanted it onto the 30-year-old man, Prabhjeet from Faridabad. It gave him complete control over his mouth, which allowed him to chew food properly after seven years since his jaw was removed due to cancer. It also improved his confidence about his appearance. The unique procedure was successfully planned & performed by Dr Mandeep Singh Malhotra, Head of Department (HOD), Head, Neck & Breast Oncoplasty and his team at Fortis Hospital, Vasant Kunj (FHVK).

Prabhjeet – a corporate executive and cancer survivor from Faridabad – had been living without right half of his jawbone for more than seven years. It was removed during a surgery along with temporomandibular (TM) joint to cure him of cancer. The TM joint controls the mobility of the jaw. Over the years his residual mandible deviated which prevented lower and upper jaw to meet. It affected his quality of life as he could not chew or bite his meals and was compelled to eat soft foods like daliya and khichdi. Furthermore, it caused repeated bite ulcers in his cheek leading to pain and fear of cancer relapse. He also has an underlying chronic disease in form of SLE (Sytemic Lupus Erythematosis) that affects immunity.

Speaking with Ten News about the clinical challenges presented in the case, Dr Mandeep S Malhotra said, “The underlying SLE disease and reconstruction of the TM joint discouraged us from planning the conventional methodology of using the one’s own lower leg bone in form of Fibula to reconstruct the jawbone. With SLE it was difficult to establish blood supply to the fibula bone, this method also involved losing a bone in the leg which cannot be compensated. The TM joint reconstruction could only be done by making a prosthetic joint and inserting it. Therefore, we thought of using 3D printing technology to develop a complete prosthetic jaw including the joint component using Titanium which is the most biocompatible and light metal. The part of the joint which shall form the jacket around the upper part of prosthetic jawbone called as condyle was formed by ultra-high molecular weight polyethylene.”

A CT scan of the face was done and with the help of CT – data models were made. Using the residual left mandible as template, its mirror image was used to create a skull model with complete mandible. We studied the prosthetic skull model extensively making sure the occlusion of both upper and lower jaw is in place. Then, a prosthetic model of actual implant to be used was developed which helped us study the functioning and aesthetics. We planned the insertion of both the implant and creation of new TM joint on skull models. This process extended across more than 9 months. Prabhat and Dr Neha put in intense effort to achieve the right alignment. The models of prosthetic mandible was also revised multiple times. The effort was to make the new jaw better than the normal. Finally, after multiple trials we got the implant printed by 3D technology into actual biocompatible titanium.

On the reconstruction surgery, Dr Malhotra further added, “Simultaneous to our planning the patient was given splints and was inducted into intensive physiotherapy. The trial models for the prosthetic mandible were revised at different time intervals as the jaws got aligned. This process extended across 9 months. Prabhat and my colleague Dr Neha put in intense effort to achieve the right alignment. Our effort was to make the new jaw better than the normal.

During the surgery, due to previous radiation therapy and surgery, there was extensive fibrosis and dissection was clinically difficult. A major problem encountered was the risk of injury to the facial nerve which is responsible for the facial expressions and movements.

The nerve was carefully isolated and the joint component was fixed in place. The prosthetic titanium neo jaw was successfully inserted. The new TM joint was created, and the mobility of the lower jaw was thoroughly checked. The surgery went for around 8 hrs, it involved a very meticulous effort from identifying every nerve branch to placing each screw exactly as planned.

Prabhjeet speaking to Ten News said, “Initially, I was unsure about it. But, when Dr Mandeep explained me that there is a good chance, I took it. Post-surgery, I was discharged after 7 days. I was on liquid and soft diet for 3 weeks to provide time for the new jaw to get integrated. Post physiotherapy, my jaw movements were optimized. Today, I can taste & chew any food of my choice. I would like to thank Dr Mandeep and his team for doing impossible, possible for me.”

Arvind Kejriwal meets Amit Shah; Says both agree to work together but no talks on Shaheen Bagh