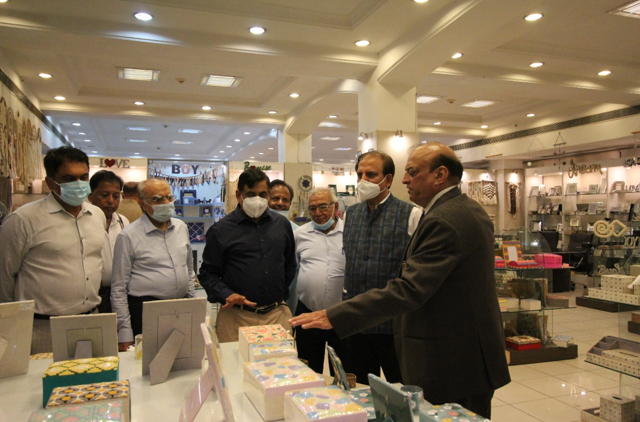 Greater Noida – 28th July, 2021: U.P. Singh, IAS, Secretary, Ministry of Textiles, Govt. of India visited India Expo Centre & Mart, Greater Noida today to get an overview of the handicraft sector, inspect Mart facilities and also discuss various issues/suggestions pertaining to handicrafts sector with the prominent exporters. The Secretary (Textiles) was welcomed by Raj Kumar Malhotra, Chairman, EPCH and in his address spoke about the journey of EPCH over the last 35 years and also shared the export performance of the sector.

Dr. Rakesh Kumar, Director General-EPCH and Chairman-IEML in his address gave an overview of the activities and initiatives of India Expo Centre & Mart and Export Promotion Council for Handicrafts and requested the Secretary (Textiles) to intervene in resolving various issues related to handicrafts sector and also sought his time in future with his officials for a presentation to discuss doubling of handicrafts exports from current level of Rs. 25,000 crores to Rs. 50,000 crores in next three years.

The Secretary (Textiles) patiently heard all the issues of exporters and assured to take up the issues with concerned departments for early resolution and hoped the handicraft sector with all its hard work would be able to achieve quantum jump in handicrafts exports in the future.