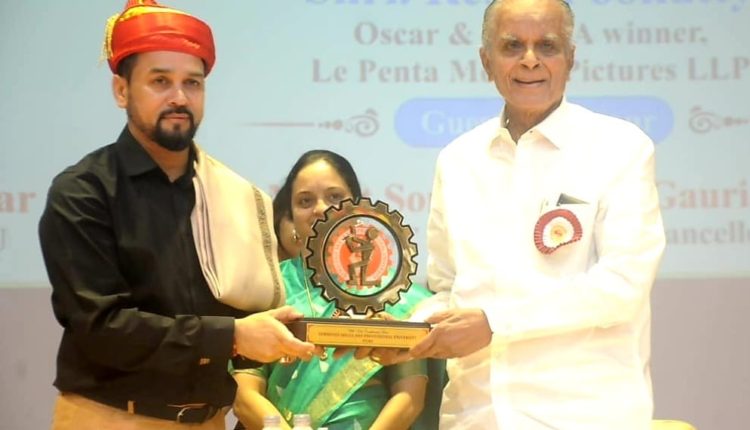 Pune (26/06/2022): Union Minister for Information & Broadcasting Anurag Singh Thakur has said that rapidly expanding digital infrastructure in the country and ongoing advancements taking place in the AVGC (Animation, Visual Effects, Gaming and Comics) sector have the potential to make India the preferred Post-Production hub of the media and entertainment industry.

Delivering the key-note address at the National Conference on ‘Changing Landscape of Media & Entertainment 2022’ organized by the Symbiosis Skill & Professional University in Pune, Thakur said “a solid digital foundation for the AVGC sector is emerging across the country and the Government has established a Task Force for the AVGC sector in order to develop world class creative talent to meet domestic and global demand”.

The Minister said the Media & Entertainment ecosystem is a sunrise sector expected to generate Rs 4 lakh crores annually by 2025 and reach $100 billion or Rs 7.5 lakh crore industry by 2030. He further said that Government of India has designated audio-visual services as one of the 12 Champion Service Sectors and announced key policy measures aimed at nurturing sustained growth.

The Minister said the radio, film and entertainment industry has a huge employment opportunity as we leapfrog into the digital era of quality content creation.  “Many job roles have emerged in the field – video editing, colour grading, Visual Effects (VFX), sound design, rotoscoping, 3D modeling etc. “Each job role in this sector requires a specific set of skills and competencies. It is imperative for industry and academia to come together and design programs relevant to the needs of this sector” he said.  Thakur said the government is also exploring new partnerships with the private sector to ensure Indian students are in tune with the upcoming technology trends in the sector.

Thakur said Prime Minister Narendra Modi’s enthusiasm for technology has provided an oasis of opportunities to give wings to the ambition of youngsters and Prime Minister’s ambition to empower the youth has been realized by the Skill India Mission that aims to train 40 crore youth in market relevant skills.

Speaking about the ’75 Creative Minds of Tomorrow’ project undertaken during International Film Festival of India 2021, Thakur said several of those talents have been creatively contributing to the media and entertainment sector and some have established successful start-ups.

Speaking about the growing start-up eco-system in India, Thakur said, even during the Covid pandemic period India added as many as 50 Unicorn start-ups, which speaks volumes about India’s entrepreneurial spirit. The Minister said he hopes to see more and more start-ups emerging from the talent pool produced by leading film schools like FTII and SRFTI too.

Stating that the content creation industry in India has undergone a massive uplift with ‘Digital India’, Thakur said “with quality content, easy access and an eager audience, India is ready to narrate its own success story and become a content creation hub”.  Thakur further said that efforts of technical people behind the scene should be adequately recognized and rewarded, moving beyond our current focus on lead characters.

Oscar and BAFTA Awards winning sound designer Resul Pookutty was the Guest of Honour at the National Conference. He said the educational institutions should revive the ancient Indian tradition of imparting wisdom to the students to face the outside world, besides developing skill sets.

Capex Plan of Rs.98,000 crore for development, upgradation and modernisation of…