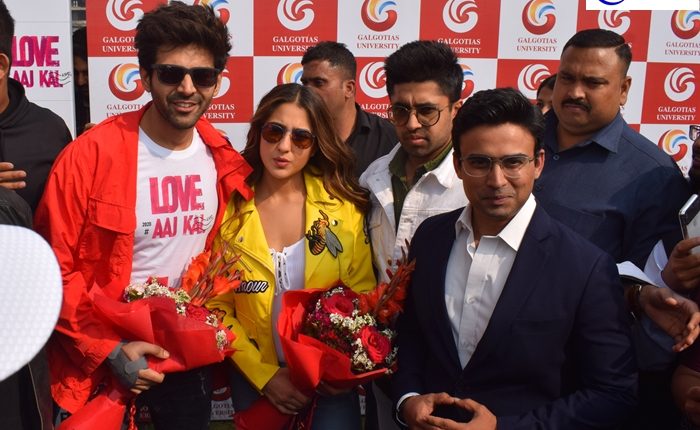 Greater Noida (11/02/2020) :  As part of the promotion of upcoming Bollywood film ‘Love Aaj Kal’, the star duo of Sara Ali Khan and Kartik Aaryan today made an appearance at the Galgotias University in Greater Noida.

Kartik took a grand entry in the university campus standing on the roof of a bus while Sara was applauding the crowd from the bus window.

Both the actors were welcomed by the Galgotias University CEO Dhruv Galgotia and Vice Chancellor Dr. Preeti Bajaj by presenting a bouquet and memento. The students of Galgotias who were eagerly waiting for the stars since 11 am looked highly charged up in a sunny morning and welcomed the duo with loud cheers.

While on the bus roof, Kartik showed some dance moves over the songs of Love Aaj Kal and later he took to the stage to interact with the crowd.

He urged all the students to rush to theaters on 14th of February and celebrate their Valentine’s Day with Love Aaj Kal.

He also tossed some goodies like teddy bears and chocolates towards the audience as a love gestures. Duo actor look surprised with the zeal and energy of their fans as the student were standing on the roofs and the balcony of their hostel room in all the directions just to take a glimpse of their favourite stars.

Kartik was seen with bandage in his hand as the actor got injured while performing a stunt on the sets of the show few days back.

Love Aaj Kal 2 is slated to hit cinemas on 14 February, on the occasion of Valentine’s Day. It is produced by Dinesh Vijan’s Maddock Films, Imtiaz’s Window Seat Films, and Reliance Entertainment.

Noida Metro ridership increases to over 3,300