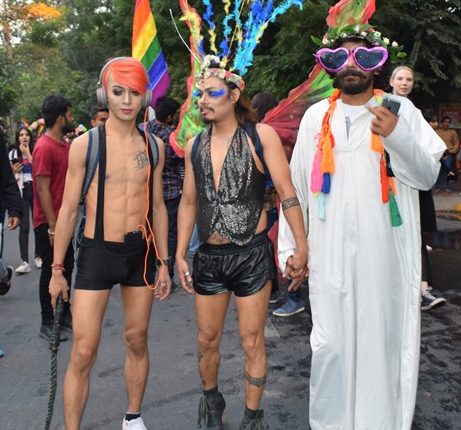 New Delhi : Sunday’s sunny afternoon adorend an aura of Rainbow in the central part of Delhi.

The occasion was to celebrate love without boundaries of sex and identity.

There were thousands on roads with banners, flats, masks and drums to reclaim the right to equality that was once denied to them.

State laws protect these individuals against discrimination, and federal laws allow transgender people to change their name and sex. Most recently, the government has allowed gay and lesbian couples to get married. Circumstances have made it less risky for people to “come out” and live openly as an LGBTIAQ Indians.

Today, People from LGBTIAQ community took part in the pride parade that takes place every year in the national capital.

The participants carried rainbow colored umbrella and flags to express support for the community.

Ten News had a word with many of the people who were part of the”LGBTIAQ PRIDE PARADE 2018″.

Speaking to Ten News one of then participant said, “It’s really a good feeling to be a part of this parade. We, really feel proud to be different from normal persons because we have faced something that a normal person can’t face in his/her full life.”

Nevertheless, even when laws protect and promote tolerance for LGBTIAQ people, problems still persist for this population.

Most notably, the murders of transgender women around the country, companies denying services to LGBTIAQ customers, and judges refusing to give marriage licenses to gay couples.

Going beyond tangible situations, there is also a feeling of avoidance from people outside the LGBTIAQ population who claim to be tolerant, yet assume a position of separation from people within the LGBTIAQ group.

Another step by RKSP for the creation of separate state for Purvanchalis: says Gopal Rai, National Head of RKSP

Those who plotted 26/11 still not convicted: US offers $5 million reward