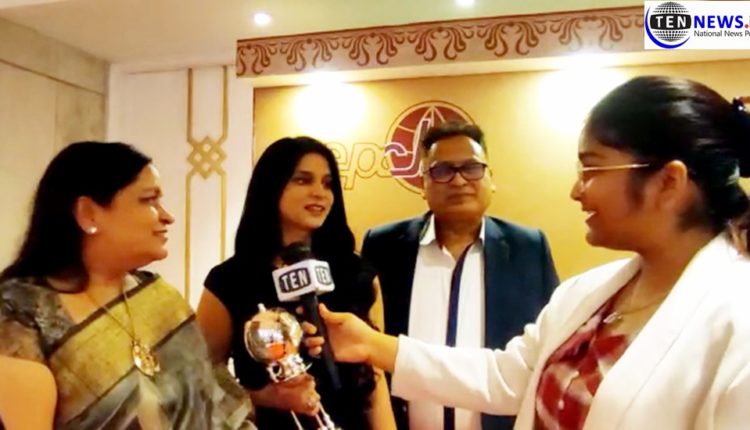 New Delhi, June 29, 2022: On Tuesday, the Export Promotion Council of Handicrafts organized its 23rd Handicrafts Export Awards. The awards honor the exporters who have made significant contributions to the country’s development and exports of handicrafts.

Sharco Enterprises was one amongst those exporters who were awarded. The company specializes in the manufacturing of handloom textiles mainly throws and pillows. “Our major strength has been the newness and mixing of the various yarns like cotton, wool, polyester, and linen. We deal with different techniques” said the owner of the company.

“I will make a special thanks to my wife and my family for supporting and bringing it (the company) to this level,” he said. “And I am very happy that we are getting the award for three consecutive years. It’s a matter of great pleasure for us.”

“The challenges are the labor problems,” he said regarding the challenges in the handicraft industry. “India is no more a developing country it is almost a developed country. So, everybody is getting educated and nobody wants to work with their hands and the future is not so great because the old people are working and the new generation is not coming into the handicraft sector. That’s a big challenge, but again it’s good for the country to grow. Eventually, everything will grow from the hands to the machine.”

“EPCH is phenomenal,” he said. “They gave the platform in the form of Indian handicraft exhibition and gift show. Everybody has an opportunity to exhibit there. Besides that they have been very strong in the overseas participation, that’s their strength.”

“My success mantra is the passion for the work,” he said. “You cannot do this without passion, it’s a must.”

Uplifting the Dying Craft is Most Challenging in this World: Sakshay International at EPCH Handicrafts Export Awards

Uddhav Thackeray resigns as the Chief Minister of Maharashtra