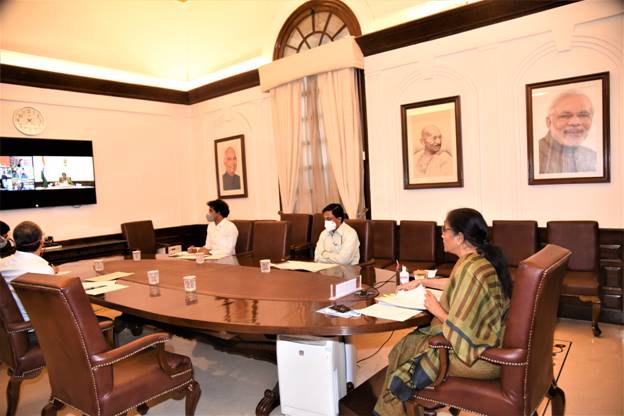 The agenda included the election of next President of NDB, appointment of Vice-President and Chief Risk Officer and membership expansion.

In her opening remarks, the Finance Minister commended the contribution of NDB in funding the infrastructure development, which has positively impacted the development agenda of the member countries, including India. Within a short span of time, NDB has approved 55 projects of member countries for an amount of $16.6 billion, which is quite a remarkable achievement. Smt. Sitharaman also mentioned that the Bank has successfully created a niche for itself and proudly stands shoulder to shoulder with the peer MDBs.

The Finance Minister appreciated Mr. K. V Kamath, the outgoing President of NDB for his stellar stewardship in very quickly giving shape to the vision stated by the BRICS Leaders in 2014. The swift response to COVID-19 through launch of the COVID-19 Emergency Programme Loan product will be remembered as one of his contributions.

Finance Minister congratulated newly-elected President Mr. Marcos Troyjo from Brazil and newly-appointed Vice President and CRO, Mr Anil Kishora from India. While congratulating them, Smt. Sitharaman remarked that she has great expectations from new leadership in continuing this momentum forward and taking NDB to the next level in terms of lending performance to members, transparency, international credibility and effectively achieving the NDB mandate. She suggested that, the focus should also be given to achieve the twin objective of preserving BRICS values and growing NDB into a global development institution.