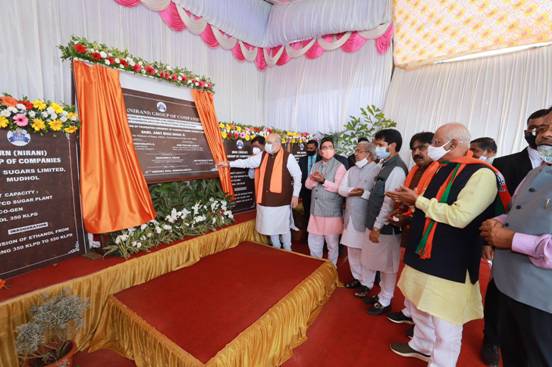 The Union Home Minister Amit Shah launched several projects in Bagalkot district of Karnataka. On his two-day visit to Karnataka, the Union Home Minister today inaugurated the expansion project of a Sugar Mill and the 75th branch of Vijaya Bank. He also laid the foundation stone of Ayurvedic Medical College and several farming projects. On this occasion, Amit Shah said that in 2014 and 2019, the people of Karnataka had voted strongly in favour of Modi ji and since Modi ji has become the Prime Minister, he has taken big step towards making a self-reliant India, – Aatmanirbhar Bharat. On the occasion, the Union Minister of Coal & Mines and Parliamentary Affairs, Pralhad Joshi, Karnataka Chief Minister BS Yediyurappa, Deputy Chief Minister Govind Karajol, Home Minister of Karnataka, Basavaraj Bommai, and other State Ministers and leaders were present.

The Union Home Minister said that the Narendra Modi government has made efforts to promote the use of ethanol and removed the central excise duty on ethanol in the year 2015, while reducing the GST duty from 18 per cent to 5 per cent in the year 2018 so that farmers could benefit from ethanol blending of petrol. Shah said that today the process of producing 2,600 kiloliters of ethanol per day is being done by the Nirani Group, which is a commendable effort. Under the new fuel policy, the use of sugarcane juice, raw sugar, molasses and rotten food grains has also been allowed to be used in producing ethanol.

Amit Shah said that when the Modi government assumed office, there was 1.58 percent ethanol blending, which the Modi government has targeted to increase to 10 percent by 2022 and 20 percent by 2025. The Prime Minister Narendra Modi has given priority to doubling the farmers income and the Modi government has hiked the Agriculture Budget to Rs 1,34,399 crore from Rs 21,931 crore in 2013-14. The MSP was increased in order to raise the farmers income by more than 50 percent of their expenditure. Under the PM Kisan Samman Nidhi scheme, as on 25th December, an amount of Rs 1,13,619 crore has been transferred to about 9 crore farmers directly into their bank accounts without the role of any middleman. More than 1,000 mandis have been made online and 10,000 FPOs set up.

Union Home Minister Amit Shah also said that under the leadership of Modi ji, the government acted boldly by removing Article 370 from Kashmir and solved the longstanding problem.

Shah said that the Modi government is committed to the development of Karnataka and today the living standard of farmers and their incomes will increase with this initiative of Nirani Group of Industries.